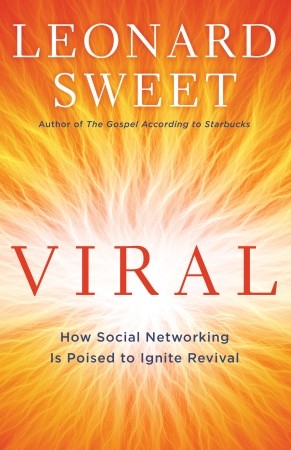 A couple of years ago a co-worker of mine came back from a conference and quoted Len Sweet as saying, “The question is not whether or not Jesus would tweet, the question is how he would tweet.” I was curious but remained unconvinced. Technology comes with a whole set of issues and where I have connected most with Christ has been when I have unplugged (rather than from some 140-characters-long-message). Then a year ago, a friend and professor of mine, John G. Stackhouse, Jr. came back from an ‘Advance’ with Len Sweet in the Orcas Islands and decided to jump into the twitterverse . I was already on Twitter, but only making occasional use of it and didn’t see the point. So when Len Sweet published a book detailing how social networking is poised to ignite revival, I thought I should read it, so I could maybe understand (and jump on that bandwagon).

Ideologically I generally feel a little out of step with Sweet. He is always waxing eloquent about where we are in culture and how we should speak relevantly in our context. I want to ask how our context can prevent us from experiencing the truth of the gospel and numb us to the Spirit’s movement. I feel this most acutely in relationship to technology. I have a blog, I’m on Facebook and Twitter and happy to amass friends and followers at each venue (and yes, I blog as a Christian), but I also wonder how technology is numbing my ability to know God intimately, to be in silence and solitude, and to make meaningful connections where I live.

When I read Viral, I heard Sweet’s strong exhortations to get with the time, to embrace the social medium and use my platform to share Christ.  These pages don’t have the prophetic edge of a Jacques Ellul or Albert Borgmann questioning what meaningful thing is lost when we embrace new technologies (although Sweet quotes Marshall McLuhan several times). You also won’t find Neil Postman’s incisive analysis of how Western culture developed technology, but technology is now making us. But Sweet is not wholly ignorant of the dangers inherent in this tangled web we weave. He just chooses to accentuate the positive.

Sweet compares the two cultures that co-exist in our time. The Gutenbergers, love the printed word, sustained thought, but are also individualistic, narcissistic and prone to argument. The Googlers are digitally connected, think its more important to be in relationship than to be right and prize images and symbols and metaphors (though they still like text). As I expected, Sweet thinks that the Googlers are where our culture has moved to and so if we are serious about engaging the world with a Christian message, than we ought to move into the digital age engaging in the entire spectrum of the ‘TGIF’ culture (Twitter, Google, iphone, Facebook).

Yet Sweet does not give his wholesale stamp on every phenomenon in the Google world.  What he is really interesting is describing our context, where we live and how we relate to each other in our day and age, and how we remain faithful to Christ in the midst of that culture. So while much of this book is a glowing endorsement of twitter and iphone, Sweet augments that with suggestions of how to tweet in a transformative way and how to tell beautiful, poetic stories of God’s goodness in an era where people spend half the day looking at cat memes.  A lot of what he says tells people how to navigate the Google world better, some of it cries out for some of the Guttenbergers’ literary skill, left brain thinking and analysis. So while Sweet comes down on the side of the Googlers, he affirms that both groups need each other.

This a worthwhile read and despite my skepticism and suspicions, I found some real insights here on how to use my online platform for the kingdom of God. This book is way over simplified in its analysis (Sweet admits as much) but it does a good job of naming and illustrating some of the major trends in culture that has happened over the past forty years. As always, Sweet provides you with a plethora of acronyms and witty terms which you will either enjoy or roll your eyes at. But despite his trendy, poppy prose, this book has good stuff to say and I would recommend it to those who are trying to be ambassadors for Christ in a digital world. As always, Sweet’s interactive discussion questions, poke and prode and invite you into deeper learning (rather than just rehearse the chapter for you). Read it. According to Sweet, if you are Googler you will read it on your reader or ipad, if you are Guttenberger, you will read the print version. I read both, which I suppose means I’m every woman (or boy).

Thank you to Waterbrook Multnomah for providing me with a copy of this book in exchange for this review.