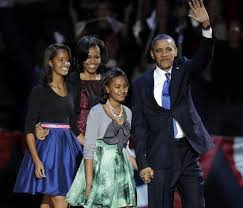 This morning many Americans awoke to the knowledge that Barack Hussein Obama had secured another term as President of the United States. Others stayed up too late last night to watch Romney’s concession speech and Obama’s victory speech. They were great. I always love the election night speeches because we get to hear American politicians at their most conciliatory and generous to their opponents (except in the 2000 with Gore/Bush race).

But what about today? What about the next four years? Obama won both the electoral college  (by a landslide) and the popular vote, but however you slice the pie, half the country woke up happy with last night’s results and about half did not. Some feel vindicated, others feel like we are stuck with four more years. Some feel like Obama’s policies are destroying America, either economically or socially.  Others are grateful that given the outcome, Obamacare will not be repealed and the military will not have more horses and bayonets.  In an election year, millions of Americans get caught up in campaigns that demonize the other side, and then on Wednesday morning we have to come to terms with the results.

What is the Christian responsibility to government? How are those who are unhappy with the results to respond to their presidential leader? Last night I read through all the Facebook updates of my very conservative (and very liberal) friends to see what kind of rhetoric they were employing. The language employed by some would make you think that we have just re-elected the Anti-Christ who will plunge America and the world into utter and complete darkness. Really?  My own Ana-Baptist leanings makes me wonder if the Mormon Church is now better off because they remain a marginal religious group and having failed to enter into the Constantinian compromise.

Whatever your feelings about the elections, I find it challenging that Paul addressed how we are to respond to government officials, only the government he had in mind was Rome. If you think Obama is leading the country into sexual debauchery and moral collapse, take a look at Ancient Rome. Or when you think of the ‘secularist agenda’ of the democratic government, think of the way Rome co-opted every religious system as their own, persecuted Christians and Jews (for not being co-optible), and worshiped their leader as a god (oh wait, we do that). And yet Paul penned these words:

Let everyone be subject to the governing authorities, for there is no authority except that which God has established. The authorities that exist have been established by God. Consequently, whoever rebels against the authority is rebelling against what God has instituted, and those who do so will bring judgment on themselves. For rulers hold no terror for those who do right, but for those who do wrong. Do you want to be free from fear of the one in authority? Then do what is right and you will be commended. 4 For the one in authority is God’s servant for your good. But if you do wrong, be afraid, for rulers do not bear the sword for no reason. They are God’s servants, agents of wrath to bring punishment on the wrongdoer. Therefore, it is necessary to submit to the authorities, not only because of possible punishment but also as a matter of conscience. (Romans 13:1-5)

The Roman leaders, even the leaders who were diametrically opposed to Christianity in lifestyle, conviction and policy, were leaders put in authority by God and called his servant. Or consider when Paul instructs in Thesselonians 4:10-11, “to make it your ambition to lead a quiet life: You should mind your own business and work with your hands, just as we told you, so that your daily life may win the respect of outsiders and so that you will not be dependent on anybody.” The prophetic stance against pagan Rome was not repudiation but conscience work and generous lives worthy of respect.

If you are upset this morning, remind yourself that Jesus is still king of the universe and his will, will never be defeated in a popular election (much less an electoral college). Remind yourself of your duty to love both your neighbor and enemy and answer the call to prayer for our country and our leaders. Obama (not a Muslim) needs the wisdom of God and the grace of Christ to lead well. We should pray for that. We should pray for a global, persecuted Church who’s suffering is often exasperated by American foreign policy (created and enacted by leaders from both sides of the aisle). And we should prayerfully seek ways to live at peace with our neighbor, even if their politics are different from our own.

Monday night on the eve of the election I sat in a pub with a friend having a far ranging conversation which touched on politics and theology and bad evangelism. We were discussing the Christian doctrine of the atonement when my friend said he is no longer sure that he can give a simple answer of what Jesus did for us. I said, in a way that clarified my own thinking, that I am at the point where when someone asks me what Jesus did, I would say, “I’ll tell you what he did, but first let me tell you who he is.” Captured in the gospel story is the reality that Jesus is the God incarnate that his life, death and resurrection subvert every other story. Jesus was the new Israel who fulfilled the hopes of God’s people. He was the Triune God’s answer to human sinfulness. He was a servant acquainted with suffering and grief. He was and is, the Resurrection in the Life. He is the King.

Both of us guys (who on Tuesday voted for different people) had read enough N.T. Wright that we understood that ‘gospel’ in the Greco-Roman context was the announcement that Caesar was King (and divine). In the hands of the disciples it became they announcement that Jesus, the incarnate God, was the real king.  Whatever your feelings about Tuesday, today Jesus is King. Tomorrow Jesus is King. And in January when Barack’s second term begins, Jesus is King.