Admittedly a book called Clear Winter Nights is not one you would typically choose for a summer read.  It  isn’t  a book that I would typically choose for myself.  I have a general dislike of Christian fiction that is too preachy. As this book consists mostly of a dialogue between a twenty-something man full of doubts and his aging pastor grandfather about faith this book is too preachy to be considered great literature. And yet I read it,  and sympathize with its over all message

Chris Walker is a recent graduate from college.  While there, he developed some serious doubts about his Christian faith. 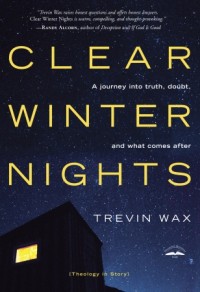 Walker is enamored with the teaching of his religious studies professor, but fueling his doubts is his discovery of his father’s hypocrisy. Chris’s faith unravels and so does his engagement  to Ashley.  Gil is his grandfather.  He is a recent widower who has suffered a stroke. He is also is the retired pastor of Lewisville, Tennessee’s Third Baptist Church.  Despite being broken and weak in body, Gil has decades of faith and wisdom to share with his grandson.

When Chris arrives to take care for his grandfather for the weekend, he thinks that Gil’s faith is antiquated and unsophisticated. After spending the weekend, his faith is enlivened by Gil’s challenge of him to hold passionately to the faith he received as a child.  Chris came  to his grandfather’s house with ideas of relativism and pluralism. Believably, he was taught  in college to downplay the uniqueness of his Christ faith, and treat all religions the same.  Gil challenges Chris to move past postmodern platitudes and to stake his claim on Christ.

What I liked about this book, is that Trevin Wax sets about the task of answering ‘intellectual doubts’ in an engaging manner; however he doesn’t assume that these ‘intellectual doubts’ are the root cause of faith faltering. For Chris, and for anyone who has ever had serious religious doubts,  it is much more personal. Chris’s faith unraveled when he found out about the moral failings of the dad he thought was a saint.  The hurt, anger and bitterness cause him to lose his confidence in his father’s faith.  His religious studies professor validated his questions and gave substance to his doubts.  I think this is often how  people’s intellectual issues with the Christian faith often work.

Yet despite enjoying the characters and the dialogue in the book, I can’t say this is great fiction.  Fiction is suppose to ‘show not tell.’ This book primarily tells (preachy dialogue dominates the story). Certainly the dialogue is believable but Gil talks in sermon soundbites most of the time (which I guess aging pastors might). I also found the ‘winter/cold/dark’ metaphors a little overdrawn. Chris comes to see Gil in a blizzard and is snowed in. As Chris starts to ‘thaw’ so does the snow. When Chris leaves Gil’s having rediscovered his faith, the ‘days are getting warmer now.’  It is not very subtle and it seems a bit much.

This may be a good read for college age Christians who are asking questions (the intended audience?).  It is a quick read and manages to cover a lot of ground.  I  give this book three stars.