The Kingdom of God is a beautiful mess.  It is beautiful because it represents the coming rule of Christ–when creation will be restored and all will be as it should be. It is a mess because it enters into our sin-sickness, brokenness and sorrow.  In this brand new edition of This Beautiful Mess, Rick McKinley helps us discover the kingdom, re-vision life in the Kingdom and practice the presence of the Kingdom. 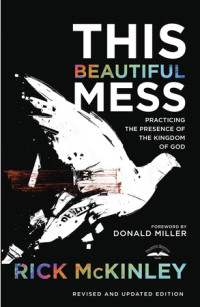 My first introduction to  McKinley was in the pages of Blue Like Jazz. He pastors the church in Portland that Don Miller attends. Miller writes the forward for this book and praises McKinley for unfolding the reality of the Kingdom for him with humor and wisdom.  And he does. He avoids popular but mistaken notions of the church ‘building the kingdom’ and instead focuses on how the Kingdom names a new reality which we welcome in and seek to live in light of.

And that is essentially what is great about this book. McKinley doesn’t really say anything that isn’t said elsewhere by others who talk about the Kingdom (i.e. Gordon Ladd, Donald Kraybill, N.T. Wright, Dallas Willard, etc.). What makes this book important is that McKinley manages to describe the Kingdom in a winsome and an engaging way.  This is the kind of book you can give to anyone and they will come away with a deeper understanding of the Kingdom. McKinley doesn’t talk over anyone’s head but he says a lot of deep, wonderful things worth reading. Each chapter reflects on a Kingdom related passage from the gospels (my guess is that this book first saw life in sermons because that’s how preachers write books). But McKinley moves deftly from the text to real-world examples of Kingdom living. This book ignites imagination of how another world is possible.

My favorite chapters of this book are chapter 6-‘the Kingdom of Peace’ and the final chapter ‘Slow Train Coming.’ In ‘the Kingdom of Peace’ McKinley uses a literary analogy, Tolkien’s the Silmarillion to describe how God is a conductor that uses even our chaos and cacophony to make his beautiful symphony.  “Slow Train Coming” gives a compelling vision of the coming kingdom which is not static, sanitized and boring but names the good things God has in store for us in Christ.

At the end of most chapters in this book are poems (presumably written by the folks of Imago Dei?). These add to the picture McKinley is painting. I give this book 5 stars with the caveat that some of my more academic friends would probably wish for a different sort of book than this. For what this book is, I think it is great.