Dietrich Bonhoeffer seems sometimes a modern-day ‘patron saint for hire.’  Famously, the Death of God movement drew on Bonhoeffer’s description of ‘religionless Christianity’ to underpin their theological claims.  More recently Eric Metaxas’s biography paints Bonhoeffer in the image of a Neo-Con Crusadader.  One of my professors in seminary, John G. Stackhouse, draws heavily on Bonhoeffer in developing his realist ethic in Making the Best of It. Stanley Hauerwas draws on Bonhoeffer in his decidedly more Idealist ethic (see Performing the Faith). Stackhouse and Hauerwas are both astute readers of Bonhoeffer but his legacy allows for divergent interpretations. This is due in part to the occasional nature of his later writings, Bonhoeffer’s moral quagmire in ‘getting involved’ in Hitler’s assassination plot, and the supposed development in his theological thought in the face of National Socialism. 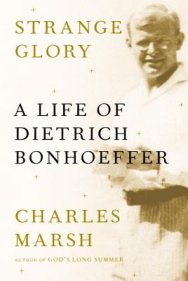 Charles Marsh’s Strange Glory: A Life of Dietrich Bonhoeffer (Knopf, 2014) promises to remove the veil from Bonhoeffer’s face and show us the real person. Unlike other biographies, this is not hagiography. Marsh paints Bonhoeffer as the somewhat spoiled son of aristocracy. However Marsh isn’t trying to tarnish Bonhoeffer’s legacy either. He is simply trying to show that the ‘real’ Bonhoeffer was more complex than many earlier portraits which were each heavily dependent on Eberhard Bethge’s biography. Marsh’s Bonhoeffer is proud, preoccupied with fashion, dependent upon his parents for money (and laundry!) into his mid-thirties, enjoys leisure, and has an ambiguous relationship with Bethge. But he remains stalwart in his faith commitment and loyal and courageous to the end.

The events of Bonhoeffer’s life are a matter of public record. What makes Marsh’s biography an important and interesting contribution to the literature on Bonhoeffer is his ability to unearth and interpret Bonhoeffer’s life. So, for example, when Bonhoeffer writes home to complain about the quality of American theological education after his year at Union (1930), Marsh delves into Bonhoeffer’s relationship with fellow students and his hearing ‘the gospel preached in Negro churches,’ and his subsequent exploration of the African American experience. Marsh has written several books on the Civil Rights Movement so is great at filling in the details and showing their impact on Bonhoeffer. But he doesn’t always take young Dietrich at his word and shows how several professors at Union helped shape his later legacy (Harry Ward, Charles Webber and yes, Reinhold Neibuhr). Not only does the African American experience aid Bonhoeffer in resisting the dominant culture in Hitler’s Germany, but he gains the skills at organizing and resistance from Ward and Webber (and grows more realistic in his Ethical commitments).  This will later aid him in his work with the eccumencial movement, the confessing church and Finkenwalde.

Perhaps the most controversial claim that Marsh makes is Bonhoeffer’s unrequited love for Bethge. Marsh doesn’t ascribe an awareness of homosexuality to Bonhoeffer or imply that his relationship with Bethge was ever consummated,  but he does probe the fact that Bonhoeffer corresponds with Bethge in giddy, emotive language. The two lived together, had a joint bank account, signed their Christmas cards ‘Dietrich & Eberhard,’  took vacations together, and Bonhoeffer left most of his earthly belongings to Bethge. Bethge for his part, was more conservative in his expressions of mutual affection, often put off by Bonhoeffer’s over-the-top, affectionate words.  I think Marsh is right to raise questions about the ambiguities here but I think he overstates his case. Male friendships can be intimate without being sexual and I am wary in pressing Bonhoeffer into the role of ‘patron saint of the LGBT community.’ As someone with strong male friendships I wonder how ‘gay’ my correspondence with friends may sound to an outside observer. Same-sex friendships can me intense and intimate, without being sexual. Marsh is trying to get behind why Bonhoeffer and Bethge communicate the way they do. It raises interesting questions, but I don’t think we can speak conclusively here. In other places, Marsh talks matter-of-factly about Barth’s affair with Charlotte von Kirschbaum (without footnote). Here again, all but the most devoted Barthian apologist would see the oddity of  Barth having a live-in assistant in the Barth family home, but the nature of their relationship is not as clear and known as Marsh makes it.

But the interpretive leaps makes for an interesting biography which should generate more discussion and inquiry. I really enjoyed reading this book. I was not at all put off by Marsh’s portrait of Bonhoeffer. When Marsh shares Bonhoeffer’s letters home (about money, about wanting new clothes, or laundry), it didn’t make me think Bonhoeffer shallow. Instead I saw a man in his twenties learning to navigate the world. If Marsh wants to paint a picture of Bonhoeffer as a patron saint, perhaps Bonhoeffer is the patron saint of late adolescence.  I give this book four stars. ★★★★

Notice of material connection: I received this book from Blogging for Books in exchange for my honest review.