Who doesn’t love a good ghost story? We The ephemeral imprint of an old soul long past from the physical realm holds us in its grasp as we contemplate a world beyond our physical life. But what if we are haunted by someone who is still alive and staying at your house? 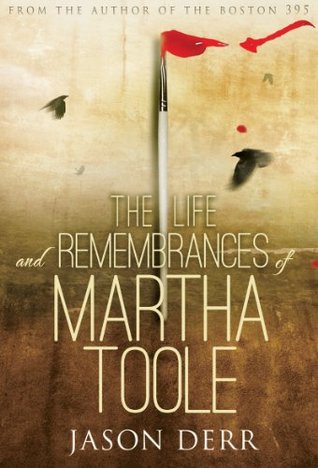 In Jason Derr‘s novella The Life and Remembrances of Martha Toole we meet Toole, an octogenarian (at least?) great-great aunt who comes for a visit the Hammer family for ‘a spell and a few days.’ She settles in and won’t leave, much to the dismay of the entire clan. But she grew up in the area and her sojourn with the Hammers is an occasion for reminiscence of days gone by–of her youthful love affair with her late husband Zach, of the farm, of family history and her sense of obligation. On one jaunt into the woods with her great great nephew John David, she visits her old house and there summons the ghost of her younger self. Martha Toole the younger accompanies John David and Martha the elder back to the Hammer Household. Now instead of one unwanted house guest, the Hammer’s are saddled with two.

Martha the younger is temperamentally different from her older self. While the aged Martha is set in her ways and suspicious of contemporary culture, the young Martha is more generous and accepting of the world around her, even as she speaks wistfully of a world where neighbors cared for one another and watched out for the other’s well being. The difference between the two Martha’s becomes more pronounced. In a climatic moment the elder Martha declares (spoiler alert):

Oh darlin’ boy this is not a time-travel story. It’s a ghost story, a remembrances story. A bt of my youth came undone on the land and followed you home – grieving all the things I grieve, celebrating all the things I celebrate. That ghost I reckon, remembers and cherishes every moment. But she ain’t I and I ain’t she. (location 594)

This is a tale which conjures up nostalgia for days of yore. But more than that, it is just a fun read. This is a ghost story but not one that strikes terror. The characters in this book accept the reality of Martha Toole’s ghost and gradually accept her place in their residence (particularly since the young Martha cooks and cleans). I highly recommend this book. I give it five stars.

Notice of material connection: I received this book from Speak Easy in exchange for my honest review.