I review a number of books, mostly of a religious nature but sometimes a topic will pique my interest and you’ll read about it here. One topic I have never before reviewed because I never before finished a book in the genre, is ‘Cleaning & Organizing.’ Don’t get me wrong. I appreciate the genre. I have purchased books which promise to help you transform your living space. Mostly I leave these on my wife’s side of the bed hoping that when she trips on them, she’ll read them and go into a cleaning frenzy. This doesn’t happen (and come on, that’s just sexist!). 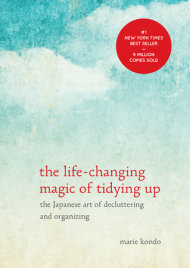 But then I got The Life-Changing Magic of Tidying up: the Japanese art of decluttering and organizing. The author, Mari Kondo developed the KonMari Method by decluttering and re-organizing her name. As a reader of housekeeping magazines from the age of five, she has invested her life in learning how to tidy and organize and her career is helping others do it too. Her method is relatively simple: throw your stuff away and what you don’t throw away, organize.

Alright maybe it is a little more complicated than that. She advocates discarding anything that is unnecessary (i.e. you haven’t used it, won’t use it, don’t actually like it but have held on to it because you feel guilty because your great-aunt gave it to you, you will only need it in a Zombie Apocalypse, etc). And she exhorts her readers to re-organize in one fell swoop by category instead of location (so you don’t end up with two junk drawers with the same stuff in it).

Kondo has lots of practical tips, but she also sees the transformative power of  a simplified living space. She writes,”In essence, tidying ought to be the act of restoring the balance among people, their possessions and the house they live in (190)” Thus she promotes simplifying your life and getting rid of the ‘things’ that weigh us down. This helpful.

But I didn’t find everything she says helpful. She talks to houses and doesn’t roll up her socks to put them away because it disrespects them (because they never get to rest, but are always tensed up).  She also only owns thirty books and suggests getting rid of most of books you own, especially if touching the book doesn’t make you happy. Here is where I got problems. I like having lots of books, even ones that don’t make me happy.  But following her advice, I have an idea where to file this book. I give this book two stars.

Thank you to Random House for providing me a copy of this book through the Blogging for Books program in exchange for my honest review.

One thought on “Clean Up, Clean Up, Everybody, Everywhere. . .a book review”