When I picked up Blindsided by God I was only tagently aware of his story. My wife read his blog and I can remember telling me about his journey. My eyes welled up with tears several times as I read his story. 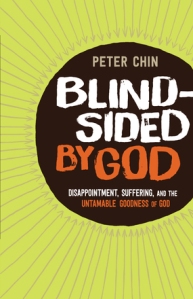 Chin was an Evangelical Covenant Pastor in Washington D.C. and a church planter.  He blogged about justice, race and the Kingdom of God. But his first year as a church planter was marked by suffering. Before he moved into the neighborhood he was to pastor in, burglars broke into the house they were moving into and stole the bathroom fixtures. That same year his wife Carol had a miscarriage. Then came a diagnosis. She had breast cancer and a particularly aggressive form of it. When they sought treatment their health insurance provider told them they wouldn’t cover them because of a gap in coverage (they managed to prove their wasn’t one and get their insurance company to reverse their decision). It seemed like everything that could fall apart in their world did.

Carol was steadfast in her faith and strong in the face of cancer. This book is Peter’s story of anxiety, worry and fragile faith in the face of watching someone he loves suffer, feeling powerless to do anything. When Carol underwent surgery they made another discovery. She was pregnant. This meant that if she carried the child to term, they would have to delay chemotherapy until at least the second trimester. An oncologist advised Peter that Carol’s best chances were to terminate the pregnancy. But Carol never wavered in her resolve. Later they discovered that women who are pregnant during their cancer treatments have a higher survival rate. Peter sees this as God’s purposes and plan as they faced this trial. Carol is alive today with three more children (her son whom she was pregnant with at the time, and two more children).

This is a faith story. Peter opens up his prayer life, his anxiety and his struggles with God and where he senses God’s answer and presence with him and Carol through their most difficult year. In the end, this ‘seminary of suffering’ taught them to trust God in profound ways and they have a powerful testimony of God’s care. But it also made Peter a better pastor, more sensitive to those in his charge. In fact, that year his church plant didn’t attract your typical young energetic disciples you would expect. Peter’s preaching attracted fellow broken people and he learned to listen to their pain without offering easy answers.

But  Peter and Carols story doesn’t wrap up neatly with all the ends tied up. They went through a lot and it took a tool on their life and ministry. Peter had to close the doors on their church plant. They have also suffered other break-ins and bad times. They still are part of a suffering world, but they have an experience of knowing God’s care and reason for hope.

This is a moving story and I challenge you to read it and not cry. I give this book five stars.

Notice of material connection: I received this book from the publisher in exchange for my honest review.

One thought on “Blindsided : a book review.”