In seminary I read about deontological, consequentialist and virtue ethics; however, I didn’t read much in the way of Catholic moral teaching. Aquinas was mentioned and footnoted, but not engaged with in any substantial way. My understanding of virtue ethics was mostly meted out to me by Hauerwas. Daniel Westberg’s Renewing Moral Theology: Christian Ethics as Action, Character and Grace delves deeply into the moral heritage of the Catholic and Anglican tradition exploring the nature of character formation, practical reason and ethical living. 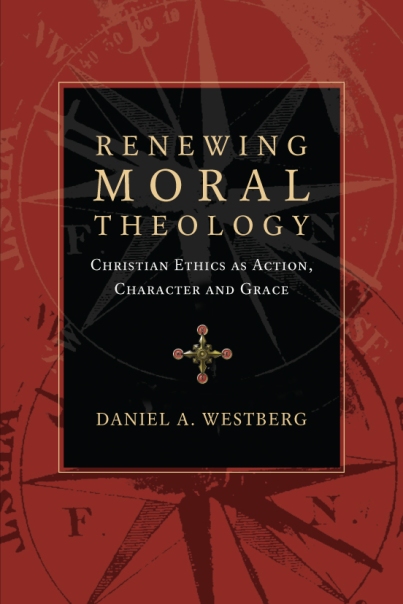 Westberg wrote this book as an attempt “to breath new life into [the] Anglican tradition, with the immediate aim of providing a systematic presentation of Christian ethics that builds on the Thomistic foundation with Catholic moral theology” (9). His wider, and more inclusive, purpose is to “provide  for the general Christian public a blending of the strengths of the Catholic tradition with evangelical emphases and convictions” (10). This combination of Catholic and evangelical insights, is designed to help readers from both traditions, to see the strengths offered by each (28). Westberg explores Thomist ethics in an evangelical key, sighting scripture and attending to the nature of conversion. His book divides into two parts. In part one Westberg describes and advances the components for a renewed moral theology. Part two looks in-depth at the seven classic virtues.

In chapter one, he argues for renewal of moral theology with a: (1) renewed biblical basis, (2) a sound moral psychology, (3) an understanding of the proper place for law in ethics, and (4) and thoughtfulness about the spirituality of virtue/character formation (25-26). In chapter two, Westberg discusses the relationship between purpose, reason and action and describes the ‘Thomistic Practical Syllogism.’ It is composed of an operating principle (‘Do this’ or ‘avoid this’), a minor premise evaluating a proposed action, and a conclusion (a commitment to do or not do something) (39-44).

Chapter three looks in more detail at Aquinas’s view of practical reasoning. Whereas the traditional reading of Aquinas identifies  a twleve stages in the process of human action, alternating between reason and will, Westberg sees the intellect and volition working in concert, and describes Aquinas’s reasoning as a four stage process comprised of: (1) Intention  → (2) Deliberation(if required) → (3)Decision → (4) Execution (51).  This model  describes the components of reasoning that birth  to an action; however a person’s intentions are shaped by  a person’s desires and history. “One simply has desire sand attitudes that have been adopted, shaped and instilled by past experience. One deliberates about and decides on the actions that are judged as means to the purposes one already has” (54). This means a persons formation determines where her reasoning takes her. Chapter four discusses how to evaluate good and bad actions based on their object, their end, and the circumstance (62-65). This ethical framework takes into account the situations in which ethical actions occur without capitulating to relativism (68). Westberg also observes the role of consequences in Aquinas’ theology. (69)

Chapter five describes  the relationship  between actions, disposition and character. Developing our capacity toward virtuous living involves moderating emotions, coordinating reason and will, and developing a habitus which imparts the skill and disposition that enable the virtuous life (80). This involves intentional practice, “We develop self control by understanding the reasons for it, desiring it and actually making decisions that incorporate moderation and self control in, for example, eating or sexual pleasure” (84).  Yet Westberg  argues that within this schema, faith, hope, and love are theological virtues gifted to us by the Spirit. We are unable to develop them by ourselves. The final three chapters of part one, explore the reality of sin (chapter six), the nature of conversion to Christ(chapter seven), and the role of the Law in Christian formation (chapter eight).

Part two begins with an overview of the virtues, discussing their interrelationship and the central role of prudence. In chapter ten, Westberg walks through the seven classic virtues assigning a chapter to each of them. The four cardinal virtues discussed are ‘wisdom in action’ (prudence or practical wisdom); justice, fortitude, and self control (or temperance)(discussed in chaptets ten through thirteen). The theological virtues are faith, love and hope (chapters fourteen through sixteen).

Westberg’s treatment of the cardinal virtues offers practical insight for character development. In discussing practical wisdom (prudence) he observes the intellectual character of this virtue and discusses its relationship with other virtues, “The moral virtues depend on practical wisdom, but practical wisdom cannot be developed without the simultaneous development of the other moral virtues” (175). The virtue of justice has to do with how we relate to other persons (i.e. righting wrongs, restitution, gratitude to others, truth telling, etc). Fortitude is moral courage and commitment. Temperance is the ‘one virtue directed purely toward oneself'(209). It involves mastering appetites and living in moderation. Each of these virtues are shared by Christians and non-Christians alike, and Westberg correlates the exercise of virtues in Christian and secular settings (i.e.  the virtue of justice based in the dignity of human beings created in the image of God is in some sense related  to contemporary secular discussions of human rights).

The theological virtues have God as its source and focus (221). Westberg treat faith as an intellectual virtue, our belief in the God of the gospel. Love and hope are virtues of ‘the will. Westberg describes love as friendship with God—unselfish love (239-240). “Hope perfects the will by directing our desire to what God offers in the age to come” (259). Westberg takes on the notion that agape love is purely non-preferential. He show the biblical evidence doesn’t warrant the strong a divide between phileo and agape often argued by evangelicals influenced by the Lutheran tradition (238-40). Instead he views God’s love as inherently unselfish (instead of selfless, self sacrifice).  The telos of new creation gives us Hope and enables us to work for justice with fortitude. The content of of our hope helps us avoid both a liberal activism or an escapist quietism (270).

Virtue Ethics is sometimes criticized for an overemphasis on character—’being’ is seen as  more significant than ‘doing’  or ‘decision-making’ Because Westberg roots his exploration in Thomas Aquinas’s moral theology, he gives significant space to both virtue formation and moral decision-making. In fact, his discussion of practical reason, precedes his exploration of the virtues (though he hints at their strong relationship to one another). This means Westberg (or Thomas) is not guilty of some of the reductionisms that virtue ethicists are accused of (neither are many virtue ethicists). Action and character both come into sharp focus.

Westberg wrote this book as a seminary textbook and it is well suited for that purpose.Students will find  solid engagement with Catholic moral theology and theological ethics. But does it have any practical import outside the classroom? Put another way: is practical reasoning, practical? Yes it is. Pastors can utilize this framework to encourage ethical reasoning in congregants. The discussion of the seven classic virtues is fruitful for personal use, or for anyone responsible for Christian spiritual formation. Westberg is theologically rigorous, so the typical lay person may find it difficult to wade in, but certainly the framework Westberg presents is applicable more broadly in the lives of ordinary Christians. I recommend this for Christian leaders and educators concerned about spiritual formation. Westberg  doesn’t provide a ‘practical how-to,’ but a way of ‘thinking through’ moral decisions’ and actions. I give this five stars. ★★★★★

Note: I received this book from IVP Academic in exchange for my honest review

One thought on “Anglo-Catholic Evangelical Ethics: a ★★★★★ book review”