In a post 9-11 world, jihad is a scary concept for many of us in the West. We look at ISIS, Al Qaeda, Hamas and violence done in Allah’s name and we are. . .nervous. Each of these organizations represent militant, extreme versions of Islam, but isn’t jihad a central tenant of Islam? Certainly we can point to some pretty terrible moments of Muslim history; however we have some terrible moments of our own: the crusades, inquisition, the holocaust (the Nazis weren’t Christian, but Christians are still implicated) and more. Muslims are as perturbed by Christian violence as we are by theirs. In The Jihad of Jesus: The Sacred Nonviolent Struggle for Justice, Dave Andrews examines the mutual history of Holy War in Christianity and Islam, naming evil where he finds it and illuminating the Christian and Muslim jihad for peace 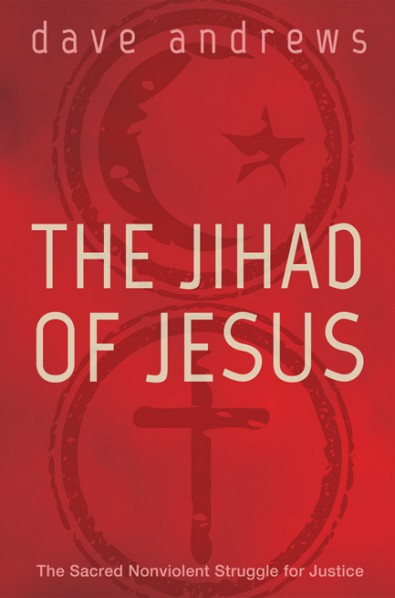 Andrews is a Christian, Anarchist, Australian committed to following Jesus consistently in the way of peace and is active in Christian community development among Aboriginals and refugees in Brisbane. He wrote The Jihad of Jesus in conversation with Muslims. While so much jihad talk moves towards fear-mongering (“they are out to get us”) or damage control (“jihad doesn’t mean ‘holy war’ it means  something like ‘sacred struggle'”), Andrews’s dialog with Islam is characterized by both humility and truth.  He isn’t afraid to call certain acts evil, but he has the grace to turn the same critical eye on his own tradition, identifying where Christians have also gotten it wrong.

Andrews begins with a section entitled “The Jihad of Dajjall.”(Dajjall  means ‘deceiver’ and is kind of like a Muslim Antichrist). Chapter one explores Christian’s use of ‘holy war’ and violence against others through out history and in our current context. Chapter two does the same for Islam. The third chapter critically engages these ‘so-called holy wars’ showing how in both Christianity and Islam have a history of doing evil things in the name of God. He closes this section critiquing ‘closed set’ religion and arguing for ‘open-set’ religion. Andrews contends that most of the conflicts between Christians and Muslims has happened on the boundaries:

A ‘open set’ approach, by contrast, focuses on the center: Isa (Jesus) and the  Bismallah (the Arabic equivalent to the Shema) Rather than defining and defending religion:

The essence of open set religion is all about becoming more open to God and encouraging everyone to become more open to God. Conversion for Christians and Muslims within a closed set perspective may mean confessing the creed or the kalimah. Conversion for Christians and Muslims seen from an open set perspective means constantly turning and moving towards the compassionate spirit of God, exemplified in Isa and the Bismillah, whether we use that language or not, judging our lives, for ourselves, in the light of God’s love, and beginning to trust His love, to sustain us, on the journey of the greater jihad of personal growth and the lesser jihad of social change that He is calling us to be involved with. (75)

So openness doesn’t apply a ‘looseness’ in the concept of God, but an intense focus and openness to the God that sits at the center of our own tradition. Here Andrews is making a nod towards E. Stanley Jones approach to interfaith evangelism, ““Get the center right, and the circumference takes care of itself.”(76).

In part two, “The Jihad of Jesus” reframes jihad as non-violent struggle, shows how Jesus’ life and teaching is our model, and recollects non-violent struggles from the history of Christianity and Islam. Chapter four  begins with a look of how terrorist organizations train otherwise good people to commit heinous acts before looking at how to retool the nature of jihad.  Chapter five focuses on Jesus’ as our supreme example. Chapter six has other exemplars (both Christian and Muslim) and what we can learn from their non-violent jihads.

This book recovers the term Jihad and reloads it with peace, justice and spiritual vitality. Andrews exemplifies not only how Christians may behave better to our Muslim neighbors, but suggests ways that we can also be sharpened and learn from them. As a Christian reader, I appreciated how a life centered on Christ, responding in openness to Jesus, pushes  me towards the struggle for non-violence. I think this is absolutely correct. It is Christendom with its empire building that makes war and violence a viable option.

I like where Andrews takes the open/closed set distinction, but I suppose I may still be somewhat closed-set.  Jesus (and the early church) make some pretty exclusive claims about salvation being through Him alone (John 14:6, Acts 4:12). There is common ground  but there will be tension at the boundaries, though the focus should remain at the center of our faith traditions.  I certainly don’t want to ‘build a wall’ at the border to ‘keep Muslims out.’ Dialogue is mutually edifying.

So don’t let the provocative title scare you.  This a book that will encourage Christians to be more like Christ in our work for Justice. Muslim readers shouldn’t be afraid either. Andrews isn’t secretly trying to convert you, and he doesn’t malign Islam (which is rare for Christian authors!). I give this four stars.

Note: I received this book from the publisher via, SpeakEasy in exchange or my honest review.