Many recent treatments of the atonement questions the dominance of forensic model in evangelicalism. There are few cranky Reformed folks that are piping out the centrality of penal substitution, but many are hunting for other models (i.e. Christus Victor, or Moral Influence, non-violent models, etc) or proposing a multi-metaphor, mosaic approach (see, for example, Scot Mcknight’s A Community Called Atonement).  Andrew Purves also questions the dominance of legal models, but he does so through a sustained engagement with three major theological voices from the Scottish Reformed tradition: John McLeod Campbell, Hugh Ross Mackintosh and T.F. Torrance.In Exploring Christology & Atonement, Purves examines each thinker’s contribution to atonement theology and Christology. While these theologians are not exactly the same in approach (Torrance and Mackintosh had their criticisms of Campbell, and Mackintosh had been Torrance’s teacher), they represent a common trajectory. Each theologian sets the atonement within the context of the relations between Jesus, the incarnate Son, with the Father. The result is that union with Christ becomes the guiding idea for properly understanding God’s purpose for the Cross and its result. 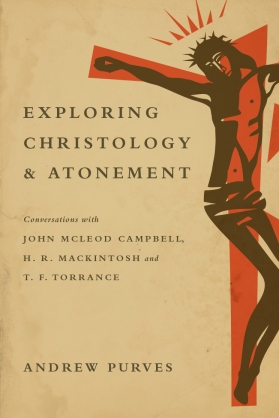 Purves is  one of my favorite pastoral theologians. His Reconstructing Pastoral Theology: A Christological Foundation and the shorter, more accessible The Crucifixion of Ministry explored ministry in the image of Christ, allowing the cruciform nature of ministry and what it means to minister in his name. Purves teaches Historical Theology at Pittsburgh Theological Seminary [Edit: Purves is now Emeritus Faculty at Pittsburgh]. In his earlier volumes he showed the practical fruit of engaging biblical, historical and patristic theology. That goal is not far off in this volume either. Campbell, MacKintosh and Torrance were first-rate theologians (Campbell was not a professional theologian but a pastor). They were also men-of-faith mindful of the implications of their theology for ordinary believers.

In seven chapters, Purves walks through the thought of these theologians. His first three chapters explore Christology, setting the atonement within the context of Christ’s Union with God and his representative union with humanity, “The Magnificent exchange is to be thought of as Jesus Christ as he unfolds himself out in saving ministry by which he joins us to himself in his human nature and us to him. Union with Christ is embedded as one work within the magnificent exchange as by the Holy Spirit he binds us to himself in his human nature to share his benefits” (124).

In the next three chapters, Purves examines Campbell, MacKintosh and Torrance in turn, exploring how each move away from Jesus being merely a satisfaction for God’s wrath but the cross being the way in which God in his love unites us with Himself.  These chapters are sympathetic-critical. Purves acknowledges aspects of their theology that are underdeveloped (such as, for example, Campbell’s pneumatology) but also gives them the benefit of the doubt, following the trajectory of where their theology leads.

Campbell’s emphasis is on how the incarnation in the atonement affects our union with God, “The atonement is not punishment for sin but rather a spiritual and moral access to the Father through Christ’s confession our sin and through union with Christ, having adopted us as ‘sons’ of God” (145).  While Christ’s atonement is vicarious, and in some sense substitutionary (in our stead), this is not conceived as a primarily legal exchange but ‘morally’ or ‘spiritually’ (152-53).  MacKintosh also moves us beyond the legal metaphors as he explores the nature of divine forgiveness. For MacKintosh, “The death of Jesus has significance for reconciliation only when considered in the light, and as expression, of His life” (183). The cross is the culmination of how he lived, Jesus already made our sins his own in his baptism and bore our transgressions throughout his earthly ministry. Jesus death reveals both God’s condemnation of sin and “God’s absolute revelation of love toward sinful people” (183-184).

Torrance’s chapter shows how clearly he stands in the tradition  of Campbell and MacKintosh and reveals that he is more than simply Barth’s acolyte. Torrance explores the interconnection of Christology and atonement, expoloring the kingly, priestly and prophetic nature of Christ’s redemption (208). He grounds Jesus’ priestly ministry in the ontological relationship between Father and Son and Christ’s hypostatic union (216).  In  Christ’s atonement, God is the primarily actor in the atonement, both in the human and Divine dimensions of his person, (220-221). “The divine Logos united himself with our human nature, revealing himself within our humanity, but also within our humanity enabled us to receive his revelation personally in love and faith and understanding” (230).

The last chapter serves as a postscript exploring how each of these theologians were concerned with how their theology worked out practically and pastorally.

My awareness of each these theologians and their work  is minimal. I have read a little Torrance, had MacKintosh’s book unread on my shelf, and had not heard of Campbell before picking this book up. As such, I probably didn’t get as much out of this book as I could have, but appreciate the window that Purves provided into the theologies of these three churchmen. I also appreciate their joint emphasis (and Purves’s) on union with Christ in the atonement and how the cross is more than just a satisfaction of God’s wrath but his means to make both his Love visible and accessible to us. I give this four stars

Note: I received this from IVP Academic in exchange for my honest review.

One thought on “Union with Our Atoning Christ: a book review”