Okay, not really seedy though a ‘seed’ (and later seeds) feature prominently in the narrative. Erik Guzman‘s The Seed: a True Myth Retold recasts the story of humanity’s fall and redemption in fantasy-novel form. The story begins wih Tatus, a hunter chasing the shadow that took his wife and children’s lives. Wyrm, a serpentine dragon takes him down, but then apparently heals him by infesting him with dark-maggot-like worms. 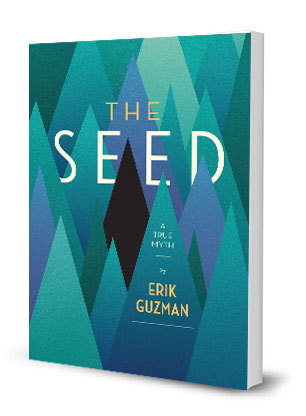 When we next meet Tatus, his wounds heal and he is now an apparent devotee to God, unafraid of the shadow and still plotting its demise. He meets a woman and a man, which he names Madeline and Roark (they didn’t remember their names) and enlists their help in building a labyrinth which will trap the evil shadow forever. Madeline lives in the tower at the center, where she is isolated from Roark who is continually building and extending the labyrinth’s outer walls. Roark is an addict, lonely and angry. Madeline is afraid. The Wyrm in Tatus’s eyes feeds on their fear and anger.

[Spoilers, kind of] Eventually love breaks free, setting Roark and Madeline free from their isolation and re-christening them with new names. They live as tree people with roots in their feet that drink deep from Nali, the water of life.  Love imprisons Wyrm and enlists Roark and Madeline (now Ruak and Madria) to defeat the dragon. They fail and their doubt and mistrust causes them to fall back under Wyrm’s control. Love seed Ilan is given as a gift to the woman, setting her free once more and causing Ilan (Love’s Son) to take on physical form as a personified tree. This sets the stage for a final confrontation with Wyrm.

Guzman, who is co-host of Steve Brown, Etc., has spun an imaginative tale making use of the  biblical fall, and the Triune God’s plan of redemption. This is an allegory and myth, making heavy use of symbol and names. It is imaginative, though not always particularly easy to follow. Each of the human characters is given at least two names (Madeline/Raven/Madria, Roark/Ruak, Tatus/Erik) through out the narrative. I enjoyed the book but it took me a while to get into the story. The labyrinth construction of a self-imposed prison was too bald of a symbol for me, making too obvious the point that Guzman was making from the get-go. But hey, it is an allegory, so that is kind of part of the genre. Eventually the threads weave together for a compelling narrative.

What I did appreciate was the theological and psychological insights that Guzman used in crafting the narrative. So I give this book 3.5 stars and recommend it as a tale that makes vivid some biblical truths about the nature of sin, God’s love for us and our redemption.

Note: I received this book from Speak Easy in exchange for my honest review.

2 thoughts on “A Seedy Christian Novel: a book review”