Shaka Sengor was guilty. He killed a man in cold blood during a dispute over a drugs. He was convicted of murder in the second degree and went to prison for fifteen to fourty years. For much of his sentence he was not a model inmate. He had a botched escape attempt under his belt. He spent time in solitary (the hole) for assaulting prison guards. But during his nineteen years in prison he was transformed through reading, spiritual practice, and ultimately by writing his wrongs:  practicing the cathartic self reflection of journaling, writing fiction and letters. 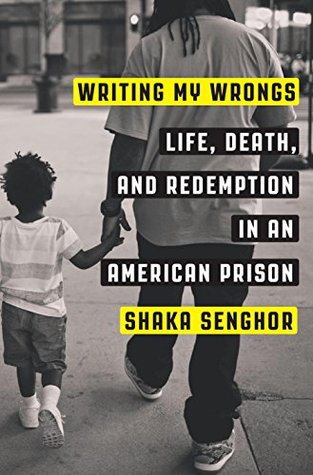 Despite Sengor’s guilt, don’t think for a moment that he wasn’t a  victim. Writing My Wrongs: Life, Death, and Redemption in an American Prison tells the story of his childhood, his experience of abuse, and his broken home, and how he was seduced into the drug trade. It also tells the story of the anger and fear he felt when he was shot as a seventeen year old and the lack of compassion he experienced from physicians and law enforcement. The experience made him afraid and angry enough to carry a gun. At nineteen, he killed a man aduring a drug transaction (Senghor was a crack dealer).

The injustice Senghor faced inside Michigan’s prisons is harrowing. He was the victim of systemic injustice and racism from prison guards. He witnessed the horrows of prison rape. He participated in violence. He experienced the psychological wounding of four-and-a-half years in solitary confinement after he assaulted a guard (his confrontation with the guard was a n0-win-situation).

Ultimately this book is a story of hope. Senghor comes to own his past, and the things he did wrong. He doesn’t make excuses for himself, but sets out to make amends through writing, community activism and mentoring youth. He finds love with an ctivist he begins a correspondence with. His transformation began mid-way through his prison sentence when the godmother of his victim wrote to him asking the why question. Senghor wrote back his regret and she forgave him. That began a correspondence (described in the prologue and afterword of this book). That set the stage for Senghor to grow and change.

I like memoirs and this is a good one. It is a compelling story. I recommend the book, but issues caution to readers which would be disturbed by violence (and language). Some of the events described are ugly: rape, feces fights, violence, abject racism. This may be difficult for some readers to take. Other books, such as Michelle Alexander,s The New Jim Crow or Bryan Stevenson’s Just Mercy tell the tale of of our broken legal system. This is an insider’s experience. I give this book four stars.

One thought on “The Write Man Was Convicted: a book review”