His sheep know his voice. John 10:4 tells us that; yet many of us struggle to discern God’s voice in the midst of daily life. Samuel Williamson, founding director of Beliefs of the Heart, has written a helpful guide to hearing God’s voice everywhere.Hearing God in Conversation: How to Recognize His Voice Everywhere helps us cultivate our curiosity and attention to the ways in which God speaks to us.
Williamson begins with a story of hearing God’s voice when he was just a 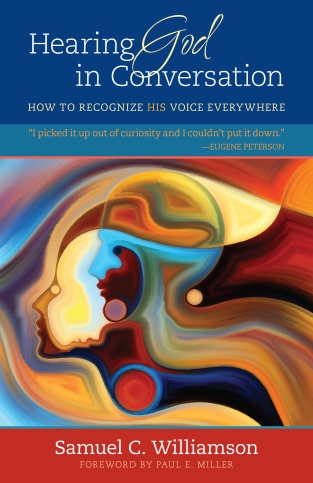 ten-year-old, newly minted atheist. When God didn’t strike down his girlfriend Diane for cussing, Williamson lost  his faith. So he started his own experiment with profanity and living like God wasn’t there. God simply said, “Sam, I’m real, and you don’t understand” (24). Williamson was brought back to faith.  While this experience is unique to him, Williamson believes we all have a capacity to hear God’s voice. He relates the various ways people hear God. In his second chapter Williamson argues that the point of God speaking is less about directions from on high (though He is still God) and more about conversation. God wants to connect and commune with us. Williamson uses the analogy of learning sailing from his dad and the casual conversations that would spring up organically as a result (35-36).

But Williamson is also an evangelical. He gives pride of place to the Bible. Williamson wants us to read our Bibles, but not as a maintenance manual or a rule book but as an opportunity to encounter the living God. We read to commune with the living God. So he offers scriptural meditation (focusing on the one book where God clearly spoke) as a way to train ourselves to hear God’s voice, “The best way to  become familar with God’s voice is to meditate on his Word, just as the best way to spot a counterfeit is to spend lots of time with the real thing” (61).

Along the way Williamson has lots of practical advice for listening prayer: how to recognize God, how to hear God’s voice for others,  hearing God’s voice in the silence, and detours of life, the place of emotions, etc. Williamson opens up about his own journey of God. He shares childhood stories of learning to hear God’s voice,  awkward words that God gave him for others (or about others),  and his process of discerning God’s call to leave a stable career with a software company to pursue full time ministry. He suggests brainstorming with God (journaling) and listening to ‘God’s questions’ in the Bible as ways to press into a deeper relationship with God.

What distinguishes Williamson’s book from some treatments of listening prayer is how down-to-earth he is. He shares stories and anecdotes with good humor (occasionally this is a bit distracting).  Two appendixes address the arguments against listening prayer by some conservative evangelicals and those ‘questionable and excessive practices.’ There are other good books on this theme (notably, Joyce Huggett’s Listening to God and Brad Jersak’s Can You Hear Me?, Dallas Willard’s Hearing God). Williamson own influences in writing include Oswald Chambers, C.S. Lewis, Dallas Willard and Tim Keller (22). He makes a strong and helpful contribution to the topic of hearing God. The best thing I can say about a book on prayer is that it makes me want to pray. This book certainly makes want to do that.

Note: I received this book from Kregel Publications in exchange for my honest review