Racism is real. We have a troubled racial history (slavery, Jim Crow, internment camps) and a troublesome current reality (i.e Police shootings, the disproportionate incarceration of minorities, arcane immigration policies, the political legitimizing of white nationalism, etc).  Nonwhites are routinely “objectified, marginalized and destroyed.” Against these historic and current trends, can we ignite our Christian theological imagination to re-image racial reconciliation and resist the hegemony of whiteness? in A Theology of Race and Place, Andrew Draper, founding senior Pastor of Urban Light Community Church in Muncie, Indiana and Visiting Theology professor at Taylor University argues a counter-imagination to contemporary racism is possible. Surveying the works of J. Kameron Carter and Willie James Jennings, Draper shows how their reading of Christian tradition, liberation theology, cultural and religious studies, and their parallel critique of virtue ethics, reveal an ‘ecclesiology of joining’ resists the contemporary racialized imagination. 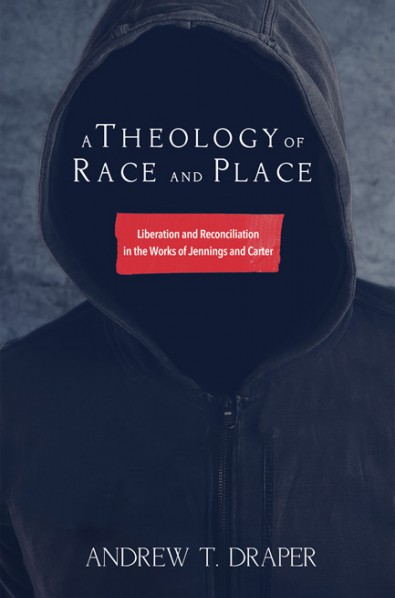 You may be suspicious, as I am, of a white guy’s analysis of two preeminent African American theologians (I say this as a white guy also concerned about racism). But Draper did not embark on this project in a vacuum. He is mentored by a prominent African American  Bishop and pastors a church that strives to be diverse at every level of leadership (3). So while Draper’s perspective is no doubt colored by white male privilege (as mine is also), he intentionally has put himself in contexts where his assumptions and prejudices are challenged and he tries to put into practice the ecclesiology of joining he is advocating for. I think it is also significant that Jennings, one of the theologians that Draper profiles, gives a glowing endorsement of the book for the ways Draper takes seriously the problems inherent in our racial imagination (back cover).

Draper’s introduction begins with a reflection on Travon Martin’s shooting by George Zimmerman and what it reveals about the ways the sociopolitical nature of whiteness is maintained. Secondly, he surveys other popular Christian and theological approaches to race, before signaling the insights of Jennings and Carter’s Theological Race Theory and giving a brief overview of the book’s structure.  In the first two chapters, Draper examines Carter, the next two chapters focus on Jennings. Draper’s introduction and his conclusion are where his own theological voice is best discerned, as he devotes the body of the text to describing Carter, Jennings and the thinkers they each interact with and critique. His conclusion examines the implications of an ‘ecclesiology of joining’ and suggestions for practice.

Chapter one discusses Carter’s critique of race in the religious academy. After providing a brief summary of Carter’s Race: A Theological Account, Draper examines his interaction with various thinkers. Carter attacks the “false category of ‘the blackness and whiteness created,’ which he reads as being no more than a settlement with whiteness”(35). But Carter’s resistance to these labels is not a “neo-Gnosticizing claim of colorblindness.” He attempts to hold in tension people’s various cultural identities without succumbing to ‘an essentializing or reductive impulse” (35).From Albert Raboteau, Carter draws insights from the theological anthropology of the Christian East and the counter-narrative of the African American experience. From James Cone, Carter discovers language for liberation and an analysis of how whiteness abstracts and undervalues particularity (49). However, Carter critiques both of these thinkers for their failure to transcend the binary of race (Rabateau for his historiographic method and Cone’s failure to move beyond racial reasoning). Carter is more critical in his reading of Charles H. Long. Long sees the problematic nature of race but his analysis is stunted by the philosophical framework of Enlightenment thinking (71).

In chapter two, Draper contrasts Carter’s theology with his teacher, John Milbank’s virtue ethic. Carter critiques Milbank for the British Imperial and Kantian undertones to Radical Orthodoxy, though his own theological project bears some methodological similarity to Milbank:

Carter presents his divergence from Milbank by implicitly and proactively aligning Milbank’s incipient Christology with the rationalized Christ-figure of Kant’s modern religious project. At the same time, through his use of Raboteau, Carter has invoked a counter-narrative of antebellum black voices that he reads as most authentically embodying the narrative of Israel. The counter-methodology bears similarities to Milbank’s theological program(94).

Carter reads Kant’s Aufklarung as providing the philosophical frame for colonial and subsequent racial imagination. Jesus’ Jewish particularity was jettisoned by Kant in order to present Christ as the ‘ur-human’—a rational figure of moral religion—recapitulating Christian thought forms through Western rationalistic, cultural expression(99). Milbank, by contrast, envisions a ‘virtuous elite’—chivilerous heroes, pastors, and Platonic shepherd guardians. Draper observes, “Neither the Kantian or the Milbankian Christ is Jewish in a significant way. In other words, a particularity of Jesus is underemphasized in order to assert his universality” (107).  Carter sees this discomfort between white and non-white bodies to be at the root of both Kant and Milbank’s projects. Thus, much of Milbank’s attempt at theological recovery is seen as an attempt to reassert European, Western tradition, in the face of multiculturalism. So while Radical Orthodoxy attempts to dismantle the Enlightenment and Modern project, Milbank’s racial assumptions still rest on its colonial assumptions. Draper closes the chapter with an analysis of Carter’s reading of Maximus the Confessor, showing how the task of theology needs to move beyond elitist and supersessionist modes and move toward mutuality and inclusion of marginalized communities (143-44).

Chapter three and four examine Jenning’s theology. As with Carter, Draper begins with Jenning’s principal work, The Christian Imagination: Theology and the Origins of Race. He then examines Jenning’s use of insights from cultural studies, particularly through the writings of Jose de Acosta, Gones Eanes de Zurara, Olaudah Equiano and Bishop William Colenso. These four thinkers are utilized by Jennings to expose ‘the imperialist grid’ of early modern Theology (27, 149). Jennings locates the trajectory of their thought within a narrative of ‘distortion, disconnection, and hope,’ through the particular story of YHWH’s redemption and the particular body of Jesus. Jennings posits a ‘Christology of Joining’ and contrasts it with the supersessionist, translation model, exemplified by Lamin Sanneh and Andrew Walls (which have the side-effect of introducing non-white persons to the ordo of whiteness) (27).

In chapter four, Draper examines how Jennings’s project critiques the virtue ethic of Alisdair MacIntyre, and Stanley Hauerwas’s appropriation of MacIntyre. Jennings’s critique of MacIntyre supplants theological history with classical Western history, “What is at stake is not simply a particularity and certainly not the dialectic between the particular and the universal, but the scandal of particularity” (231). Draper shows where Jennings traces through MacIntryre’s After Virtue colonialist assumptions to produce a eurocentric version of the Great Tradition (i.e. his characterization of Cook’s views of Polynesians, and subsequent appropriation of ethnocentric language). Hauewas, for his part, more satisfactorily incorporates biblical accounts of virtue and offers a critique of Constantiniansm; however, to the extent that Hauerwas reenacts “the ethical voluntarism” of MacIntyrian ethics, he is implicated in the same critique:

Hauerwas remains one of the contemporary thelogians who has most complelling [sic] reminded the church that faithfulness to her Lord means resisting violence and Empire. However, his MacIntyrian tradition of virture has limited his recognition that, since the colonial moment and its attendant supersessionist imagination, violence and Empire are fundamentally racialized realities. It has also limited his recognition that these racialized realities are strenthened by theological accounts of Western virtue. While Hauerwas’s account is to be be preferred to Milbank’s and MacIntyre’s, traditions of Western virtue extend the tragic legacy of reflection on the “other” characteristic of theological currents at the “dawn” of Western expansionism. (262-63).

Draper contrasts the Aristoliean-Thomist approach of MacIntyre with the theological anthropology of Barth and Bonhoeffer. He argues that Barth’s ontology resists essentialism and that God is not known in his eternal essence, but through ‘his acts in history.’ “That is why for Jennings (as with Barth), the church is not so much an invisible mystical union with God as it is visible, particular identification with others in the body of the Jewish Jesus” (249). It is in inhabiting the particular story of the Jewish Messiah presented in scripture that Barth and Bonhoeffer were provided the wherewithal to resist the racialized theology of the Third Reich.

Draper offers a meaty engagement with both Jennings and Carter and their interlocuters. In his conclusion, he examines how their work present an ‘ecclesiology of joining’ with implications for practice (eating together: an end to ‘hosting’ (as a “we feed the world” approach), a rethinking of place as particular and shared space,  a move toward mutual participation, and multidirectional proclamation. This doesn’t mean that the church does not have anything unique to say or offer but it does mean that the incarnational witness of the Word  , as presented in the thought of Jennings and Carter, point us to a more thoughtful and humble mode of Christian mission. Ethnocentricity and paternalism have too often characterized missiology. We are ripe to relearn a few things. Particularly challenging is how a missiology of translation (a la Andrew Walls or Sanneh) poisons the well by transmitting colonial concepts of whiteness instead of incarnational faith.

Jennings and Carter see the underpinnings of whiteness in the colonial era and the philosophy of Kant and the danger of a supersessionist reading of the gospel, where Israel’s particularity is replaced with a vague occidentalism. Draper demonstrates well how much the wider culture and the church imbibed the racial assumptions we’ve been bequeathed. This is evident in Jennings and Carter’s interaction with Virtue Ethics. Milbank critiques the Enlightenment and modern Liberalism while internalizing its non-particular (and vague) theological assumptions. MacIntyre and Hauerwas offer a critique of modern morality and civil religion but their project rests on Lockean and Eurocentric assumptions. Personally, I have a greater appreciation for virtue ethics than Draper has (96).  I especially love Hauerwas. Yet, I think Jennings’s critique of Hauerwas sticks (as opposed to shallow critiques which just saying Hauerwas is unrealistic and disengaged).

Thinking theologically about Race is important. Race may be a sociopolitical construction with Colonial and Kantian roots, but minorities continue to be hurt by our shared, and inherited racial imagination in the West. I found Draper’s discussion of Carter and Jennings both challenging and suggestive. I recommend this book for anyone who has an interest in mission, ethics and race (which should be everyone). I give it five stars ★★★★★

Note: I received this book from Wipf & Stock in exchange for my honest review.