Kenosis is a word used to describe Jesus Christ’s self-emptying—his denouncement of His divine nature in choosing to born human and suffer the shameful death of the cross. Philippians 2: 5-11 describes the kenotic shape of Jesus’ earthly ministry, culminating in His glorification:

5 Let the same mind be in you that was in Christ Jesus,

6 who, though he was in the form of God,
did not regard equality with God
as something to be exploited,
7 but emptied himself,
taking the form of a slave,
being born in human likeness.
And being found in human form,
8     he humbled himself
and became obedient to the point of death—
even death on a cross.

9 Therefore God also highly exalted him
and gave him the name
that is above every name,
10 so that at the name of Jesus
every knee should bend,
in heaven and on earth and under the earth,
11 and every tongue should confess
that Jesus Christ is Lord,
to the glory of God the Father.

Jesus laid aside divine knowledge (Matt 24:36), limitless power, and His divine rights, in order to enter fully into the pain of our humanity and effect our salvation.

If we are to follow Jesus, the same kenotic shape characterizes our own spiritual lives. As Paul says, “Let the same mind be in you that was in Christ Jesus. . .”. We too are called to lay down rights and privilege. But what does this kenosis look like for us? How do we do it?

Fasting, Lenten fasts our otherwise, is one form of self-emptying. By forgoing the food that sustains us, we become more aware of our relative comfort the rest of the time. We also become more cognizant of suffering as we experience, in a small, controlled ways,  the pain of deprivation. 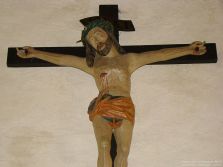 But fasting isn’t the only kenotic practice we are invited to by following Jesus. If we are serious about putting on the mind of Christ, we also have to lay down our privileges. For me, this means taking stock of what privileges I am afforded as an educated, white, Protestant, cis-gender male and seeking ways to lay down my privilege and sense of entitlement. As a white male, I could choose to ignore racial discrimination and sexism without the threat of personal recourse.¹  I have never been threatened or bullied for my sexual orientation or gender identity. I don’t have to worry about which bathroom to use (I’m a man, the world is my urinal). My education affords me opportunities other people don’t have.

I was born with rights and privileges, but the kenotic nature of following Jesus means that I look for ways to lay aside these rights and privileges in order to enter more fully into the pain of those around me. My kenotic journey began a dozen years ago when my wife and I went to urban Atlanta to love the poor with Mission Year. We were your typical, paternalistic white, do-gooders that didn’t understand the dynamics of systemic racism and privilege but by rubbing shoulders with friends and neighbors (and good mentors), we learned a few things. I’ve continued my kenosis through seminary and post-seminary. Except for a brief tenure as pastor, I have been in jobs where I’ve felt underemployed and had to wrestle with my internal superiority complex and sense of entitlement. Currently, I wrestle with the nature of privilege while raising a family. I want my kids to have every opportunity and to succeed in life, but really I want my kids to follow Jesus. Worldly success or a taking-up-your-cross-kenosis  has a different telos.

What does kenosis mean to you? How has it shaped your Spiritual Life?

One thought on “K is for Kenosis (an alphabet for penitents)”