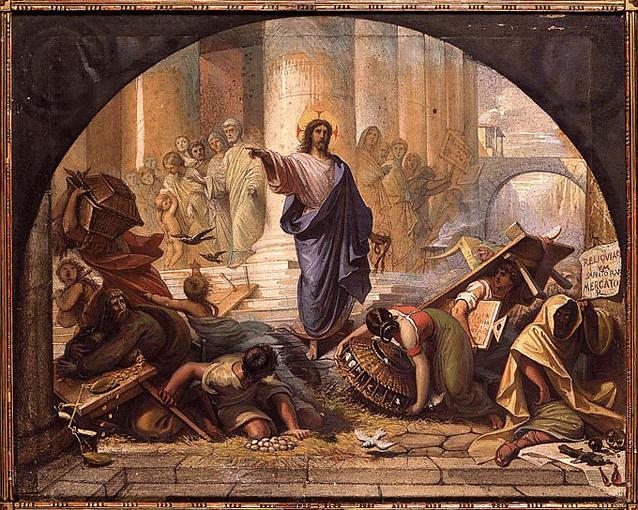 Jesus entered the temple courts and drove out all who were buying and selling there. He overturned the tables of the money changers and the benches of those selling doves. “It is written,” he said to them, “ ‘My house will be called a house of prayer,’ but you are making it ‘a den of robbers.’” -Matthew 21:12-13

Until Jesus entered the temple courts he was hailed as Israel’s Messianic hope—the Anointed One who would return to save people from their oppression.  His first act after to riding into town, shouts of Hosanna still ringing in his ears, was to fashion a makeshift whip, overturn the tables of money changers in the temple courts.

The Passion Conference and Maranatha weren’t the first to turn worship into big business. In the 1st century, worshippers came to the temple and sacrificed animals to God. The offering of the poor was a dove. Doves were available to them if they would just pay a fee plus a surplus tax. Money changers exchanged the coins of diaspora Jews for the temple coin, the Tyrian shekel (a coin without a graven image on it). This exchange was not in their favor.

Temple economics were the antithesis of care for the poor, widowed, orphaned and foreigners (Zechariah 7:10). It was a system of exploitation and it made a mockery out of the worship of God that was supposed to be happening there. A den of robbers, not a house of prayer.

Overturning the tables (or destruction of property during a protest) did not and does not bring about immediate change. However, this wasn’t just a one-time thing. Jesus entire ministry involved upending our expectations and socio-political systems. In The Upside-Down Kingdom (Herald Press, Updated Edition, 2011), Donald Kraybill writes, “From beginning to end, from start to finish, the thread of inversion and irony weaves its ways through the gospel”(211).  He began his public ministry reading these words from Isaiah:

“The Spirit of the Lord is on me,
because he has anointed me
to proclaim good news to the poor.
He has sent me to proclaim freedom for the prisoners
and recovery of sight for the blind,
to set the oppressed free,
to proclaim the year of the Lord’s favor.” (Luke 4:18-19; cf. Isaiah 61:1,2).

All throughout his ministry, Jesus challenged systems of oppression, spiritual elitism, gender roles, structures, and Empire. By the necessity, the Kingdom of God upends all other contenders to the throne and welcomes a new way of life where the poor, the prisoners, the blind and lame find love and welcome.  Yet it was Jesus’ symbolic act, upending of tables in the temple courts, which very well be the act which got him killed.

If you follow the story through, you know the upending was not done. Jesus would take a cross, the symbol of Roman dominance over any would-be revolutionary, and turned it into a symbol of how far God would go to welcome us home. The first witnesses to his resurrection (women) defied cultural expectations. And Jesus’ surprising upending still happens whenever people choose to live by the values of upside-down kingdom instead of the American dream.

A decade ago, a craze hit the Christian world—rubber bracelets stamped with the letters “WWJD?” There was other Kitsch as well: t-shirts, necklaces, hats, temporary tattoos, pencils, travel mugs, etc. The letters stood for “What Would Jesus Do?” and were drawn from the ninteenth century novel by Charles Sheldon, In His Steps. The idea behind the slogan (and the novel) was that as we go about our daily life, in whatever sphere we find ourselves, we ask “what would Jesus do right now if he were in our shoes?” My sarcastic reply whenever I saw WWJD bling on the wrist of a friend was, “Jesus wouldn’t buy that.” And it’s true because he already would know what he’d do.

We live in a world where the rich profit off the poor, “a livable wage” is fodder for political debate, bombing another country is framed as humanitarian relief, and refugees and immigrants are regarded with suspicion, minorities still suffer discrimination. I think it is  now time for us to stand with Jesus in the temple courts, fashion our makeshift whips and ask, “What Would Jesus Upend?”

One thought on “U is for Upending (an alphabet for penitents)”