As I write this, we are at the beginning of Passover, a celebration of the Exodus of the Israelites from Egypt and the beginning of their long sojourn to the Promised Land. Israel’s Exodus wasn’t just its liberation of Egypt, but it encompassed the forty-year wilderness journey with forty-two different campsites and G-d’s covenant with Israel at Sinai.  Both Christians and Jews read the Torah, and the Exodus story,  as Scripture, looking for what deeper meaning it has for life. Christians describe Jesus as our Passover lamb and appropriate Jewish traditions of liberation and salvation. Unfortunately, we haven’t often paused to listen to how Jewish interpreters understand our shared scriptural tradition. 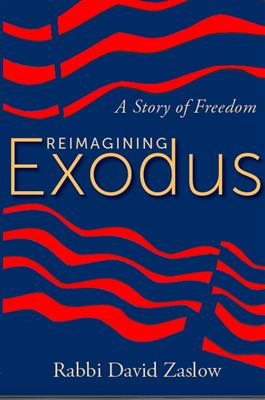 Rabbi David Zaslow is no stranger to the interfaith discussion. His award-winning book, Jesus First Century Rabbi, explored the Christian gospel from a Jewish perspective (I review that book here). As the synagogue leader of Havurah Shir Hadash in Ashland, Oregon (not too far away from my home in Medford), workshop leader and media pundit, he has deepened the dialogue between Jews and Christians.

His newest book, Reimaging the Exodus: A Story of Freedom builds a bridge between Judaism and Christianity while respecting the unique features of both religious traditions.  Zaslow happily notes the common themes of Passover and the cross, Exodus and Easter. Yet, he also notes ways in which Christians have bowdlerized the Jewish tradition with a replacement theology that demeans the sacred history of the Hebrew Bible.

Zaslow’s book divides into five parts (so did his last book. Self-conscious patterning after the Torah?). Each section is distinct in style and purpose. In part one, Zaslow describes the significance of the Exodus for the Jewish tradition—G-d’s liberation of Israel and their forty-year, two-hundred-mile journey, learning to walk in freedom. Part two offers a Midrashic interpretation of twenty passages from the Torah (mostly drawn from Exodus, but also Numbers and Deuteronomy). Zaslow’s commentary on the passages is scholarly and rich, but suggestive and evocative. Part three explores the common themes and key differences between a Jewish understanding of Exodus and the Christian Easter. Part four discusses in more detail the ways Christians (and Jews) have historically appropriated and misappropriated the tradition to justify various agendas (i.e. Puritans settling the New World, American Colonialism, the American Revolution against British Tyranny, Civil War Southern’s against the North,  Mormons, Civil Rights advocates, etc). Part five has personal stories (and a poem) of where Zaslow has seen Exodus reimagined in interfaith contexts (including an interfaith Good Friday service with a Portland synagogue, and stories from a model seder Zaslow leads in a Catholic parish).

Zaslow has an irenic nature and looks for ways that Christians and Jews can connect with each other and find common spiritual ground. He is respectful of what is distinctive in Christian theology and practice, but he is not afraid to offer a sharp critique of Christian supersessionism and replacement theology. Too many Christians have treated the Old Testament and Jewish Tradition as a mere prequel and failed to listen to the insights of Judaism. In Zaslow’s early book (Jesus First Century Rabbi) he engaged the Christian gospel traditions. This book invites Christians to a similar engagement with Judaism. Beyond just mining the text for Christological insights, the Exodus has a lot to teach us about what it means to be human and to be spiritual. Rabbi Zaslow’s evocative Midrash reveals as much.

I give this book five stars and recommend it for Christians, Jews and those who are spiritual but don’t sit easily in either world.  Zaslow invites us to a journey toward freedom, ” Just as the Exodus began with a catastrophe of enslavement but led to a great redemption, so we pray to God that the catastrophes of our own era are merely preludes to an even greater redemption and the liberation of all humanity as well as the planet” (33). ★★★★★

Notice of material connection: I recieved a copy of this book from Paraclete Press in exchange for my honest review.

One thought on “An Exodus to Freedom: a book review”