[Notice of material connection: This review was prepared for The Englewood Review of Books and can be read on their site, here]

I first encountered the work of Fr. Emmanuel Katongole in Reconciling All Things (IVP 2009), a book he co-authored with Chris Rice. That book was a user-friendly guide, discussing the Christian resources for reconciliation, and included an excellent chapter on lament.  This, alongside several other reflections, convinced me of the power and place of lament in Christian Spirituality. Since then, Katongole has written several books reflecting theologically on politics and violence in Africa and ethics. 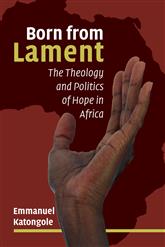 Katongole is currently associate professor of theology and peace studies at the University of Notre Dame, Indiana as well as a Catholic priest of the Archdiocese of Kampala, Uganda. In Born from Lament he casts a vision of hope for Africa, despite their cycles of violence, ethnic cleansings, poverty, and displacement. Focusing on the African Great Lakes region (an East African region that includes Burundi, the Democratic Republic of Congo, Kenya, Rwanda, Tanzania, and Uganda), Katongole describes how, amid violence and injustice, lament has given African peoples agency amid suffering, enlivened their spiritual lives, and has enabled their move from hopelessness, to hope.

Katongole’s central argument is that “in the midst of suffering, hope takes the form of arguing and wrestling with God” (Introduction, xvi). Adopting the ‘portraiture’ methodology of social scientists Sara Lawrence-Lightfoot and Jessica Hoffman Davis, Katongole blends his theological reflections with empirical research on the African experience and poignant story-telling designed to both inform and inspire.  So, while this is a book of academic theology, Katongole uses stories of African Christians and faith activists to demonstrate the “ecclesiological, theological and practical dimensions” of hope in Africa (37). This makes for an engaging read.

Born From Lament, unfolds in five parts. In part one, Katongole describes the nature of hope in Africa on soils that can feel hopeless. Chapter 1 discusses Jason Stearn’s book, Dancing in the Glory of Monsters, which examines the effects of violence in the Congo. With this as a backdrop, Katongole discusses the nature of hope for Africa. In chapter 2, Katongole discusses the lack of theological reflection on hope for the African continent and the need for it, and outlines his methodology for this study.

In part two, Katongole argues that the starting point for any discussion of hope, for suffering peoples, is ‘the valley of lament.’ In chapter 3, he explores the book of Lamentations and its implications for the discipline of lament. Walking through the various discernable voices in Lamentations, Katongole contends, “[lament] is a complex performance, a discipline, that involves many actions: crying out, exercising memory, maintaining silence, repenting, and earnest praying” (60). This provides a way for suffering people to stand and stay engaged with God in “the shattered ruins of life” (Ibid). Chapter 4, explores examples of Lament in African songs, poems and visual arts, noting that for all their anguish, the East African laments are marked by ‘a conviction of God’s presence in the midst of forsakenness’ (122).

Part three, begins with an exploration of the Psalms of Lament and the ways in which God appears silent in the text.  Drawing on insights from Jurgen Moltmann, Katongole concludes that the prayer of lament in the face of Israel’s cry, “points not to an uncaring God but to a God who stand with his people in their cry, and the laments and suffers with them” (119), and exemplified by the silent suffering of Christ on the cross. This reality of God’s hiddenness, also opens the way for a pastoral, political and practical engagement on behalf of the crucified (120).  In chapter 6, Katongole tells the stories of the late archbishop Emmanuel Kataliko of Bukavu (Congo) and Sr. Rosemary Nyriumbe of Saint Monica Girls Tailoring School in Gulu, Uganda as examples of a “passionate, pastoral, and practical response to the reality of a suffering God” (123).

In Part four, Katongole examines “the Peace of Lament” In chapter seven, he looks at the prophet Jeremiah and how his “lament-saturated ministry” worked at four levels: “(1) as a social critique, (2) to mourn the covenant, (3) as a reflection of Yahweh’s tears and (4) an announcement of newness” (151). According to Katongole, these four components provide the conditions that make God’s shalom possible, providing a revolutionary nonviolent vision of society (152). Chapter 8 examines the life of Archbishop Christopher Munzihirwa of Bukavu as a concrete example of prophetic critique and enacting a vision of shalom. In chapter nine, Katongole describes ‘the costly loss of lament’ responding to Melissa Snarr’s critique of lament as a distraction from needed political reform.

Part five, examines the fulfilment of Jeremiah 31:11-22 in Matthew’s gospel with the death of the holy innocents (Matthew 2:17-18)— Rachel weeping for her children. Chapter 10 describes how the background of the Jeremiah passage (and the Rachel story, moving from barren to blessed and fertile) point to both sorrow, and the experience of ‘newness’ through God’s action:

What Matthew’s memory of Rachel also does is deny any sociological reductionism whereby lament inevitably leads to newness. Rather, critique and newness, lament and hope are connected through divine agency and grace. Rachel’s tears do not lead to a new thing. Through her tears she enters into the dynamic and creative movement (set of movements) through which she is carried forth into an unexpected new future as her grief turns into hope. That hope, the new future, is God’s creation (199-199).

In the final three chapters, Katongole weaves Rachel’s tears, Jeremiah’s promise, and Herod’s murder of the holy innocents with portraits of African faith activists who responded to the suffering they saw, and held out hope for newness.  Chapter 11 profiles the work of David Kasali and the Congo Initiative, as they hold out hope for ‘God to do a new thing’ in their midst. Chapter 12, describes the story of Maggy Barankitse and the work of Maison Shaom in Barundi, as a gendered and generative dimension of Rachel’s tears (Barankitse is a woman and a mother who began the hard work of reconciliation in the wake of racial and political violence). In chapter 13, Katongole discusses the connection between hope, courage, and martyrdom through the lens of several of East Africa’s martyrs.

This is a storied theology of lament and hope. Christians in East Africa have experienced the reality of war, genocide, widespread sexual violence, displacement, and poverty. When Katongole gives us a profile of suffering saints and martyrs and their experience of lament and hope, he describes realities and circumstances that most of us in our western, privileged bubbles, can scarcely imagine.  So as a western reader, there is a bit of a learning curve. Yes, people in America suffer violent trauma and systemic injustice. Very few of us have experienced massacres, where there were too many people killed, to offer a proper burial.  As Katongole observes that Africans have suffered the cosmological disorientation of lost futures, lost community, and lost humanity (12-15). The effects and scope of violence are far reaching.

Nevertheless, this is a hope-filled book. The saints and activists profiled in these pages, face honestly the horrors of life, wrestle with God about it and begin to envision new social realities which reflect the shalom and kingdom of God. In the movement from utter despair, towards an activist, spiritual hope, here is the power of lament to turn mourning into dancing! Or better, the presence of God in our suffering, we engage with as we lament.

In Katongole’s conclusion, he draws together some of the threads of his theological reflections. He describes how the practice of lament is agency, allowing activists to stand up amid terror and despair and name the pain they are experiencing (261). It is also a way of wrestling (or arguing) with God through suffering, and finally being drawn into “the drama of God’s saving engagement with the world, at the heart of which is the mystery of Christ’s suffering, death and resurrection” (261). This in turn leads activists to ‘new places’ personally and politically as they begin to work out a new vision for society (263). Katongole also describes how activists begin to experience the marks of freedom in their own lives as they plant seeds of hope on the African continent and experience the reality of Christ’s universal body—a corporeal reality (262-4).

Katongole closes by saying, “The African church is a unique gift to world Christianity” (264). This is what I felt most acutely. A church that has suffered so much, and yet holds out hope for a new future, a new community and new life, is a prophetic witness to us. I was inspired by the faith activists that Katongole profiled, most of whom are new to me. Their movement from sorrow, trauma and despair, to the work of shalom gives me hope for my world as well. I give this five stars! – ★★★★★