Until now, I had not read any of the commentaries in the IVP Reformation Commentary on Scripture series. My interest in the theological interpretation and historical theology usually drives me to a much earlier era. I love the Desert Fathers and patristics and have spent some time with the Ancient Christian Commentary series.  However, my interest was piqued by the lastest Reformation Commentary volume, edited by Roland Rittgers, in part because of the celebration of the Reformation’s quincentennial, and partly because volume XIII, examines the books of Hebrews and James. 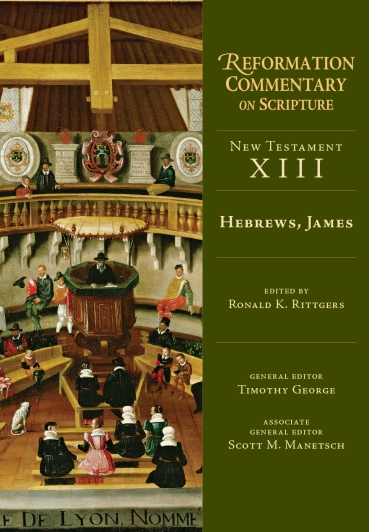 I love these two epistles, yet Martin Luther had a lower estimation of them.  Luther liked Hebrews, though he did not place it on the same footing with apostolic teaching (3). He regarded it as a non-Pauline epistle, but he did think the author of Hebrews was at least a disciple of the Apostles, and Luther’s lectures on Hebrews (1517-1518), influenced and impacted his maturing Reformation theology (pp. xliii-xliv). James, on the other hand, he regarded as an epistle of straw, “with nothing of the nature of the gospel about it” (200). Despite Luther’s opinion of these books, other Reformers were more charitable in their assessments, many regarding the former as Pauline, and the latter as apostolic and authoritative.

The Reformation Commentary on Scripture follows much the same format as the Ancient Christian Commentary does. Each book is broken up into sections by pericope, with verse by verse (or paragraph by paragraph) commentary drawn from the writings of various reformers. The first thing I noticed was the breadth of voices which Rittgers includes. There were Catholic reformers and Christian humanists, (e.g. Gasparo Contarini, Desiderius Erasmus, Thomas More), Lutherans, Calvinists (e.g. John Calvin, Theodore Beza), Swiss Reformed (e.g., Heinrich Bullinger, Huldrych Zwingli) Anglicans, Puritans, and Radical Reformers (e.g. Menno Simons, Dirk Philips, Melchoir Hoffman).  Jacobus Arminius provides a counter-voice to some of the hardline Calvinist comments on Hebrews. Given the era, the voices included were mostly male, though Rittgers does include a sole entry from Marguerite of Navarre (104-105).  Some of these commentators were familiar to me. Many were not. There is an appendix with “Biographical Sketches or Reformation-Era Figures and Works” which profiles most of the references included here (though curiously doesn’t profile Edward Dering, who comments extensively on Hebrews but lucky for me there is Wikipedia).

Often the differences of opinion between the Reformers fall predictably along the hardened denominational lines of latter days. The Reformers wrestled with Hebrew’s apparent teaching that we can lose our salvation. Anabaptist commentators like Derek spoke forcibly of the forcibly of the need for excommunicating false believers (82). The Protestants loved what Hebrews says about the supremacy of Christ, but went to great pains to show, against Catholic sacramental theology, that Christ is not sacrificed again in the mass, but once alone for our sin (see, for example, Johannes Bugenhagen’s comments on Heb 9:11-12. p 125). In dealing with James, Lutherans, in general, were less sunny toward the epistle as Luther had been, whereas magisterial Reformers, and Anglicans regarded it much more favorably.

I read through this commentary in about a week’s time. There is enough here that is devotional. The Reformers read the Bible with an eye toward what it meant in life. Their comments are pre-critical in the sense that they do not occupy themselves with sources, literary form or the text’s setting in life. They are much more concerned about explicating what the implications of these epistles are for the lives of the faithful. This isn’t to say that they were unaware of debates about issues like authorship, but their answers were meant to either give weight to either the text or their critique of the epistles’ theology. As theological interpreters, they read the Bible in a Christocentric way.  Hebrews especially send the Reformers back over the Old Testament, looking for the ways the Hebrew Bible testifies of Christ. James’ critique of favoritism and partiality toward the rich, mirrored the era’s critique of corruption in the Church.They were serious readers. They engaged the words on the page.

It is fruitful to read commentaries from people outside of our own era. The sixteenth-century Reformers had their own blind spots and weren’t privy to some of the critical insights we have today. Yet their God-focused, Christ-centered interpretative tradition shaped our theological traditions. Rittgers has compiled an accessible entry point into their theology. I give this commentary four stars. – ★★★★

Notice of material connection: I received a copy of this book from IVP Academic in exchange for my honest review.

One thought on “Hebrews and James, Reformation Style: a book review”