Pastoral Care is often thought of on a purely micro level—counseling congregants through a crisis, walking alongside families in grief, or shepherding local congregations. Political theology, on the other hand, describes political, economic, social structures and practices, examining the issues at a more macro level. But what if there is a deep link between the political and the personal? What if the best way to care for souls, is to care for the polis—providing a framework for the flourishing of both individual persons and the common good? 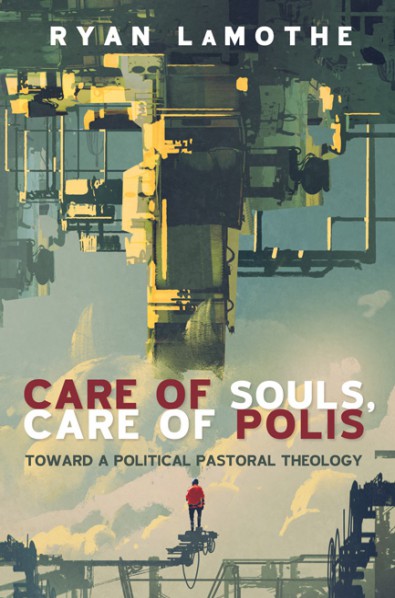 Ryan LaMothe is professor of pastoral care and counseling at Saint Meinrad Seminary and School of Theology.  In Care of Souls, Care of Polis: Towards a Political Pastoral Theology(Cascade Books, 2017), LaMothe develops “a hermeneutical framework for analyzing systemic issues.” Rather than conceptualizing pastoral care as an individualized discipline, LaMothe places pastoral care within the frame of care and justice, describing and understanding its import as a political concept.

In the first 4 chapters, LaMothe describes a conceptual framework for pastoral political theology, in chapters 5-8 he examines the macro issues of empire, neoliberal Captialism, class, and related issues which erode care and justice. He also suggests ways for the church to be an alternative polis.

In chapter 1, LaMothe provides an overview of the polis (society) and politics in political theologies:

[P]olitical theologies, generally speaking, are concerned with how human beings organize themselves in time and space, as well as with how human beings survive and flourish. The political theological activities of reflection and action presuppose not only a particular religious mythos but also other knowledge systems (e.g. philosophy, human sciences) used to examine and critique political institutions, realities and issues of a particular societal context and era (22).

LaMothe notes (following Daniel Bell) that if all theologies are political than pastoral theologies are as well, and he notes a number of ways political-economic realities impact pastoral care, “Domestic violence, adequate medical care, food insecurity, widespread incarceration and economic poverty and numerous other areas of concern, reflection and care are intertwined with political-economic factors, though these issues may not be in the foreground of pastoral theological focus” (22).  LaMothe argues that the lens of care—not just for individual souls, but for the polis—enables to more readily see the political implications and connections in pastoral care.

[A] political pastoral theology, grounded in the Christian mythos, aims to understand and assess current political-economic narratives, issues, institutions and structures, and to develop programs and policies that are themselves assessed and critiqued. A central interpretative framework for these aims is the notion of care, informed by the Christian tradition and the human sciences and aimed at the survival, flourishing and liberation of individuals, communities, society and the earth. Care of the polis necessarily includes a cooperation of diverse others, and thus a political pastoral theology must attend to the communicative practices of a society (29).

In chapter 2, LaMothe considers the relationship between care and politics. He argues that care is aimed not just at a person’s survival, but at the flourishing of communities and families—the common good (47).  He draws on the notion of kenosis (Christ’s self-emptying) as a model of care for the Other, and posits that for communities and society to flourish, the notion of care (whether pastoral care, government, NGOs, etc) is a necessity.

This comes into sharper focus in chapter 3. LaMothe relates the concepts of care and justice in political pastoral care, drawing on black liberation theology and South and Central American liberation theology. Lamothe takes the emphasis in liberation theology on (1) attention to the community, (2)the preferential option of the poor and (3) responsiveness toward oppression and argues that political pastoral theologians be mindful of and respondent to the systemic oppression and marginalized in society (83). LaMothe argues that while both justice and care are necessary for human flourishing, a viable, and thriving polis depends on a rigorous ethic of care—where all members of society are recognized as valued (92). Justice is necessary to correct wrongdoing and repair relationships, but in creation itself, notions of care precede justice (and enemy love and forgiveness are expectations):

An ethic of care is grounded in the ontological reality of creation, and human beings are cocreators particularly through recognizing and treating Others as persons. This cocreation of the space of appearances ideally occurs in parent-child relations, family relations, communities and societies. A viable polis, then relies on an ethics of care, and it is an ethics of care that grounds an assessment and critique of political-economic institutions, structures and policies (92).

Chapter 4 argues for a civil and redemptive discourse both in political and pastoral speech.  LaMothe notes, “a polis begins to shrivel and die when civil discourse is replaced with self-certain, self-aggrandizing, intransigent monologues that aim at coercing the Other into acceptance of one’s singular vision of the world” (95). He warns against totalizing speech, and urges us to follow Jesus’ kenotic example of self-emptying (Phil 2:7), and discover ways of speaking in civil (and pastoral!) discourse which are both humble and hospitable:

Kenosis is the difficult discipline of clearing the psychic room to make space for and welcome the Other in reverence and this psychic room is related to the space of appearances of the polis. The fruits of a kenotic discipline are humility and hospitality, which are key to redemptive discourse and its aims of inviting, revering, respecting and understanding the Other. This is redemptive because it seeks to overcome alienation by inviting the possibility of real meetings between persons in the midst of disagreement (123).

This recovery of redemptive speech is necessary if we are to find ways to care for our increasingly fragmented world. “We need a redemptive discourse that rejects the facile pleasures of self-certain total explanations that opts for the belief in and practice of just and caring speech in the face of hostility and hatred” (127).

Chapters 5-8 describe overlapping macro, political issues and how they relate to pastoral care. In chapter 5, LaMothe examines the way empire is part of our U.S. cultural DNA. U.S. history exhibits the imperial and expansionist aims of empire, and as an empire in decline, it has become increasingly violent (131). LaMothe describes the emergence of the U.S. Empire, its carelessness and injustice. He argues that the church ought to provide an alternative narrative to Empire, not in the sense of being anti-imperial—as in the polar opposite of empire in every respect—but by providing an alternative version of what it means to be human:

While Jesus grew up in a world where Roman imperialism was daily fare, his ministry, his way of being in the world, was not based in opposition to empire. In other words, Jesus’s public actions were not anti-imperialistic, but were alterimperialistic in the sense that Jesus offered an alternative, and this alternative is represented by the term kingdom of God. The kingdom of God is not in opposition to the imperium, at least in the direct sense. Rather, it is an alternative polis that has nothing to do with imperial practices. Indeed, imperial policies and practices are inconceivable in a kingdom based on love, compassion, care, mercy, justice and forgiveness (152-53).

And so LaMothe describes ways for the church or other communities which oppose empire, of being an ‘alterempire.’

Chapter 6 describes the contributions of neoliberal capitalism to suffering in the polis and the subsequent distortion of Christian theology (à la the Prosperity gospel). Classically, Max Weber envisioned a robust Protestantism as both enabling the development of capitalism and restraining its acquisitiveness (173). That is, capitalism was subordinated to Judeo-Christian values and anthropology. However, under neoliberal capitalism, the engine of acquisition drives and distorts our theological understandings instead. Material wealth and success are seen as the signifiers of divine blessing.

Here too, LaMothe commends us toward an altercapitalism:

As a small polis, the ecclesia promotes, through liturgy, preaching, retreats, classes, and stories, the standards Christian virtues of faith, hope and love—virtues necessary for the care and justice. Indeed, the very notions of care, justice and the common good are tied to these virtues so that the notions do not become distorted by the values associated with the market society (i.e. with the commodification of care). Living as an altercaptialist community necessarily includes being deliberate about nurturing interpersonal relations and fostering a critical reflective stance toward the larger society so that community members and leaders are not co-opted by the hegemonic discourse associated with the values and expectations of the market. An altercapitalist community serves, then, as a countercultural entity by developing subjects with capacities for a type of critical thinking connected to caring virtues and for the kind of social relations that are personal. (196).

Chapter 7 extends this political-economic analysis with a critique on classism, pointing to the example of the early church attempting to live as an alterclass community where all members were mutually cared for. “Yes, they failed, at least with regard to perpetuating this kind of community. But they succeeded in imagining a community that did not depend on or reproduce class” (229).

Chapter 8 closes the book with a look at several relevant issues for a political pastoral theology: climate change, education, healthcare, the judicial system, the politics of exclusion.

LaMothe writes as pastoral theologian teaching in a seminary; however, the notions of care for the common good, and the focus on macro issues which erode care and justice, makes much of what LaMothe says applicable to any community resistant to the dominant voice of U.S. Empire. LaMothe’s chief interlocutors are the gospels, Paul and Liberation Theology, but the concept of being alterempire (promoting an alternative to imperial and expansionists aims and advocating justice and care) is a word for activists of all stripes, faith traditions, and ideologies.

While this book was published in 2017, and many of the issues raised here are relevant to Trump’s America our damaging long pedigree and the examples of U.S. Empire, Neoliberal capitalist distortions, classism, exclusion, etc,  LaMothe cites are from an earlier era (Obama and before). Still, LaMothe’s discussion of self-aggrandizing totalizing speech and the need for redemptive discourse struck me as a particularly appropriate warning against our current polarizing political speech.

LaMothe is sympathetic to radical politics and doesn’t interact as much with Protestant political theologies (briefly O’Donovan and Volf, no James K. A. Smith). Certainly, there are evangelicals that see a broad overlap of politics and pastoral ministry (e.g. David Lane, Mike Huckabee, Jerry Falwell, Jr), though they often are not as cognizant of the socio-economic impact of empire, class and economics which LaMothe highlights here.

LaMothe points pastoral care practitioners toward a greater awareness of systemic problems which complicate care. This will be a helpful resource for pastors and congregational leaders, as well as theological instructors and students. I give it four stars – ★★★★

Notice of material connection: I received a copy of this book from Wipf & Stock books in exchange for my honest review. Cascade Books is an imprint of Wipf & Stock.

One thought on “Pastoral Care and Politics: a book review”