I am not sure exactly when I first heard Kathy Khang’s voice but I know it was online. In real life (IRF), I am about 1 degree of separation from her, having friends in similar circles (e.g. InterVarsity Christian Fellowship, ministers and activists and the Evangelical Covenant Church). But I know I am grateful for getting to know her voice, and she’s challenged me (mediocre white male, that I am) to rethink stuff and be more mindful about systemic racism and appropriation. I vividly remember Kathy calling attention to Lifeway’s Rickshaw Rally, the all white cast of a progressive Christian conference discussing the peace of the Gospel without any thought of diversity, and challenging White Evangelical complicity in systemic racism and Empire (i.e. Trumpism). 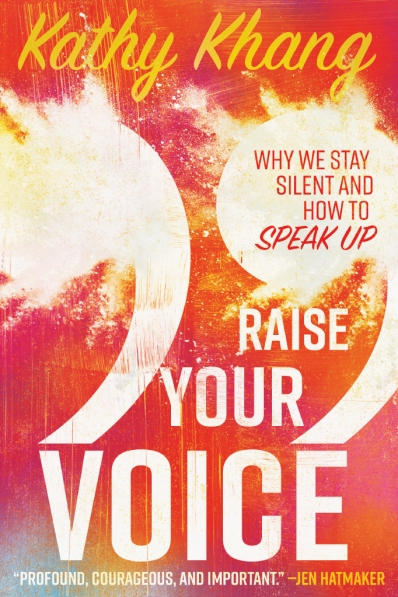 In part 1 of Raise Your Voice, Khang shares how she learned to ‘raise her voice.’ She emigrated from South Korea as a child, and navigated American culture as an Asian American, an immigrant and a woman and mother. In lots of ways, she was pressured to be silent and remain silent. However, she found her voice and began speaking about cultural appropriation, faith, violence against the Black community, feminism, and politics. As she shares her own story of speaking up (or sometimes not speaking up) she also reflects on the biblical example of Moses (afraid to speak up when he was called),Esther (who learned to raise her voice to save her people, the Jews, from certain destruction and the Bleeding Woman (Mark 5).

Part 2 offers some practical reflections on how to speak up. This is not a ‘how to’ book, but Khang shares some insights and practices that have helped her both listen well, and speak up when she needs to (these are related domains). She explores what it means to use our voice in real life and the various spheres we occupy (everything from our ‘underwear family’ all the way to our job). She also describes her process and gives practical advice on how to engage with people online and on social media and the various ways each of us can use our gifts and talents as we learn to speak in our own voice.Khang conducted interviews with Reesheda M. Graham-Washington,  her friend Brenda, and artist, Maggie Hubbard which she includes here to show these women learned to raise their voices.

I read Khang’s book eagerly with anticipation. Her voice is one I really respect, and often when issues come up in our culture (e.g. immigration, lies, collusion, white supremacy, violence), I look to see if she’s written anything about it. She has a peculiar gift for cutting through the crap with both truth and grace.

I’m a white male, and therefore my voice has been culturally privileged.  I’ve had to learn to stop and really listen before I speak (and as an extrovert this is hard to do). But in other ways, I too can be silent and not speak up in the face of the authorities and in the case of injustice. Sometimes I am too afraid to speak up. Sometimes I don’t feel like I understand enough. But to speak up is to name our hope that real change is possible. Kathy’s words and her voice give me courage to raise my voice.

I received a copy of this book from the Author and IVP in exchange for my honest review. I also purchased a copy to share with someone else.