Food, clothing and shelter occupy the bottom floor of Maslow’s hierarchy of needs. Housing is basic to our being—a human right. Yet among low-income families, eviction has become a way of life. A lack of livable wage, addictions, financial mismanagement, personal crises, profiteering landlords, rising housing costs are among some of the causes for evictions. And this all compounds bad circumstances making it difficult for people to find other adequate—livable AND affordable housing. 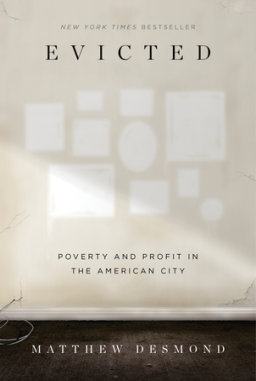 icted: Poverty and Profit in the American City by Matthew Desmond follows the experiences of eight families who are evicted from their homes. Desmond is the John Loeb Associate Professor of the Social Sciences at Harvard University and the co-director of the Justice and Poverty Project. For this project, Desmond conducted Ethnographic research by living as a tenant in College Mobile Home Park, a trailer park on the south-side of Milwaukee before relocating to an apartment building in the north-side’s inner city. In both cases, he shadowed landlords and property managers as they maintained property and handed out evictions. He befriended the people whose stories he shares.

This is an important book, but it isn’t an easy one to read. It is heartbreaking. Desmond tells the story of people at their most vulnerable, and things often go from bad to worse. Mounting bills and an eviction notice have a way of making it difficult for people to pull themselves back up.

Desmond highlights the difficulties faced by low-income families, though he sees this project as contributing to “a robust sociology of housing”:

We need a robust sociology of housing that reaches beyond a narrow focus on policy and public housing. We need a new sociology of displacement that documents the prevalence, causes and consequences of eviction. And perhaps most important we need a committed sociology of inequality that includes a serious study of exploitation and extractive markets. (335).

Desmond doesn’t make the evicted out to be saints nor demonize their landlords. Sometimes the evictee’s own behavior (i.e. failure to pay, addictive behavior, etc.) led to their eviction. Sometimes their landlords tried to work with tenants and gave them plenty of chances.  What Desmond does call attention to here, is to a system that values profit over people and the effect this has on the most vulnerable. People who get evicted have no network of people who are willing and able to help. Not family, not the government, not church.

Most of this book is descriptive, not prescriptive, though Desmond does suggest federal aid for low-income housing via a voucher system in his epilogue. Whether you find this solution compelling, this book is a good window into what challenges poor people face in this country. I give it four stars.

Weaving his own story  and experience throughout his analysis, Glaude begins by recounting his time in Ferguson during the non-indictment of Darren Wilson.  He describes, also, how the sub-prime lending of the nineties, had a particularly devastating effect on African American people. Gaulde concludes that the violence against the Black community, the lack of economic aide for African Americans, and discriminatory voter identification legislation are evidence of the on-going white supremacy of our country. By this he doesn’t mean abject racists in white sheets burning crosses but a value gap where “no matter what our stated principles or how much progress we think we’ve made, white people are valued more than others in this country, and that fact continues to shape the life chances of million of Americans. The value gap is in our national DNA” (31).

Glaude argues that  this value gap is maintained by racial habits of all of us. For example, there is still discrimination against African Americans in the workforce when assumptions are made about an applicants qualifications are made on the basis of race. The exact same resumé with the name LeKeisha on it, or the name Lisa are viewed differently(58). [I worked with a community development organization in the Overtown neighborhood of Miami, and had African American friends who struggled to find jobs based on being from that zip code]. But even if there was no active discrimination against African Americans they still would not be afforded the same opportunity. Careers and job opportunities often come through our networks and Black Americans do not move in the same social circles as White Americans. Glaude observes, ” Seventy-five percent of white Americans report that their social networks are entirely white” (58). This is one example but American racial habits are pervasive:

We are all shaped by racial habits in some way or another. They are as natural to America as apple pie and fireworks on the Forth of July, and come to us as easily as the words we’ve learned since we were on our mother’s knee. In this sense, racial habits are our inheritance: they contain history of white supremacy that has shaped and continues to shape this country. There are millions of accumulated decisions that make inequality an inextricable part of what it means to be American. If we are to undo them (at least some of them), something dramatic must happen. (64).

Another evidence of white supremacy is the presence of white fear. Glaude shares how he, as a well dressed, educated Princeton professor being seen as a threat by a Princeton collegue’s wife in the university parking lot. He shares another tale of discrimination from his son. But his evidence for white fear isn’t just anecdotal. He cites news stories, articles, and studies about how white Americans (and even African Americans) view black people as a threat. This is evidenced by the sixty percent of working-class white Americans that “believe discrimination against whites is a worse problem than discrimination against blacks”(87)! Also by the way politicians on both sides of the aisle, including President Obama, invoke the idea of black criminality in their rhetoric(89-90).

Glaude examines the way in which politicians and leaders invoke the civil rights story and the narrative of racial progress as a way to excuse themselves from making systemic changes that promote justice and true democracy. Martin Luther King’s legacy is co-opted as an example of equality and shared opportunity and an example of  the American dream. However:

It is always a particular version of Dr. King–the King of the March on Washington who dreamed, not the radical King who marched with garbage workers or understood the connection between the evils of poverty, racism and militarism or called attention to the fact of “two Americas.” This whitewashed King often gets in the way of frank and fearless discussions of black suffering, because his words , in the hands of far too many, are used to hide racial habits and sustain the value gap. (96)

On this score, Glaude criticizes both republicans and democrats saving some of his ire for Barak Obama’s betrayal of Black liberalism (see chapter seven).

While the facts of race relations in this country are pretty grim, Glaude closes his book on a more hopeful note. He calls for ‘a revolution of value’ which would change how we view government, change how we view black people and change how we view what matters, ultimately, as Americans (184).  Government ought to be concerned with the public good and  the care for the vulnerable (185-97), African Americans need to be seen and valued ever bit as much as White Americans are (198-202), and we need to subvert the dominant narrative of American exceptionalism:

We have to tell better stories about what truly matters to us. The kind of stories we tell reflect the kind of people–the kind of nation–we aspire to be. Bad stories, like bad habits, typically correlate with bad people. So better stories are needed to change the country. Americans have to challenge directly the idea that we are “the shining city on the hill” or “the Redemeer Nation.” We have to release democracy from the burden of American exceptionalism. To do this, we have to tell stories of those who put forward a more expansive conception of American democracy. (203).

One sign of hope that Glaude names comes from his observation of the Black Lives Matter movement.  The charismatic civil rights leader is a relic of a bygone era. The new movement “insists on the capacities and responsibilities of everyday ordinary black people and urges them to reach for a higher self even in opportunity deserts. Those deserts are fertile ground to be politically creative” (227).