I don’t always agree with D.A. Carson. His brand of Reformed Evangelical with a Gospel Coalition, complementarian comb-over puts me at odds with some of his conclusions; however I always appreciate the thoroughness and attention he brings to the biblical text. His Exegetical Fallacies has kept me from some fuzzy hermeneutics, and when I am in the market for a new, new testament commentary, I always check his New Testament Commentary Survey (Baker Academic) which catalogues the strengths of the various commentaries for each book of the New Testament. Where I appreciate Carson most is as a Bible commentator. He has written (or edited) some incisive commentaries and studies. His John Commentary (in the Pillar New Testament Commentary Series, Eerdmans) is usually my first stop when I am studying or preaching from that gospel.

So when I got my 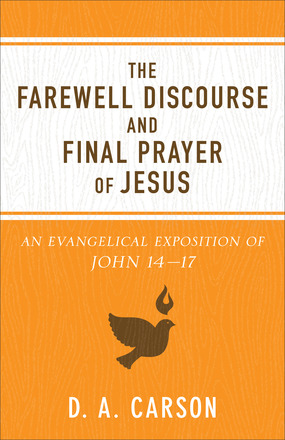 hand on The Farewell Discourse and Final Prayer of Jesus: An Exegetical Exposition of John 14-17, I was excited to see Carson’s trademark attentive exegesis, but I was also curious how he would handle Jesus’ so-called ‘high priestly’ prayer for Christian unity. I feel like Carson’s evangelical brad stresses truth over unity and I was curious as what he may say here and whether or not I would demur from it.

For the most part I found this, as expected, to be a pretty solid engagement with the biblical text. I puzzled a little bit with who Carson’s intended audience was. He notes in his preface, “A need exists for both academic and popular approaches [to scripture]: but this volume belongs to the latter camp” (9). And indeed this a non-academic, non-technical commentary in that there are no long strings of Koine Greek or technical djargon. But if it is a ‘non-academic’ text, it also seems to be an unpopular one. Carson, does lay aside the technical discussion, without quite descending to the level of popular. So, for example, in commenting on Jesus’ phrase in John 14:2, “I’m going there to prepare a place for you,” he writes:

The underlying Greek text precedes these words with a causal “for”: that is, “In my Father’s house are many rooms (the next words, “if not I would have told you” are parenthetical); for I am going to prepare a place for you. The “are” in the first line, as often the case in John’s Gospel, is proleptic (anticipatory) (26).

Carson’s comments here assume a working knowledge of Greek grammar and syntax. This is not exactly popular, even if it lacks some technical percision. However, it does give you the sense of how closely Carson reads the text, and tries to make inferences based on the words on the page. This is the sort of evangelical interpretation I applaud most, and found much that I resonated with and it gives a great deal of what Carson says a rootedness. He isn’t just spouting off opinions, he is engaging with scripture and trying to interpret it faithfully. This is good stuff.

So what of the high priestly prayer and what it says about unity? How does Carson handle that passage? Well, he eschews both those who are ecumenical at the expense of Christian truth and those who think ecumenism is evil (and thus ignore Jesus’ prayer all together). He posits that in our current era, not everything in modern Christendom is really Christian (232), or at the very least, there are competing definitions of what qualifies as Christian. Therefore, he posits the unity envisioned is a unity centered on the person Jesus Christ and our connection to him. He writes:

Whoever cites John 17 to justify a unity that embraces believers and apostate, disciple and renegade, regenerate and unregenerate, abuses this passage. Such ecumenism has its roots not in Scripture but in a misguided (if well-intentioned) notions of what New Testament Christianity is all about.

On the other hand, the things that tie together true believers are far more significant than the things that divide them. The divisive things are not necessarily unimportant: sometimes they are points of faith or practice that have long-range effects on the church for good or ill, reflecting perhaps some major inconsistency or misapprehension concerning the truth. Nevertheless the things that tie us together are of even more fundamental importance. Regardless of denominational affiliation, there ought to be among Christ’s people a sincere kinship, mutual love, a common commitment, a deep desire to learn from one another and to come, if at all possible , to a shared understanding of the truth on any point . Such unity ought to be so transparent and compelling that others are attracted t it. To such biblical ecumenism (if I may so label it ) there is no proper objection. Indeed, it is mandated by the Final Prayer of the Lord Jesus himself (233).

I really appreciate this vision of Christ-centered unity, centered around Jesus Christ and regard Carson and his Gospel Coalition friends as sisters and brothers and Christ and am grateful for some of the ways they bear witness to God’s work in the world. Nevertheless, I’m also conscious of ways they draw lines and fail to recognize the legitimacy of faith of some of my Christian friends because of different doctrinal or social concerns. But I appreciate Carson’s words and desire to lean into Christ’s words.

In the end, this is a pretty solid exegetical exposition. Not too technical, but technical enough that the reader that has done at least a little ground work will find it more fruitful. I give this four stars (really 3 and change, but I’m going to round-up because I appreciate a lot about this). – ★★★★

Notice of material connection: Baker Books sent me a copy of this in exchange for my honest review. They didn’t tell me what to say or ask for a positive review, but an honest one.