I wasn’t quite sure what to expect when I picked up Brad Formsma’s I Like Giving: The Transforming Power of a Generous Life. The title did not grab me. I expected that the pages would included highly individualized tale of how rewarding he finds giving. And yes, he does open up his own story of giving but what makes this book so special are the stories he shares from co-conspirators, givers and recipients of his and others’ generosity. Some of the gifts given are simple: time, attention, small acts of service. Some gifts are radical acts of generosity: vacations, money for college tuition, surgery, water heaters and forgiveness. Formsma shares and these giving stories in hopes to inspire readers toward more generous living. 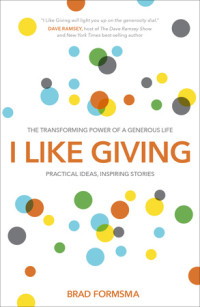 This isn’t a ‘theology book.’  Formsma’s, giving is an act of faith and his response to nudges from the Holy Spirit. He doesn’t unpack this, preach or try to persuade people of the moral obligation to give. Instead he tries to awaken the desire to give by sharing stories and ideas and invites us to look for people and situations we can give towards. This book is an invitation more than a summons.

There is a ‘Chicken Soup for the Soul‘ feel to some of these stories: heartwarming encounters and miraculous answers to prayer. I may just feel sentimental, but I was really touched by a lot of these stories and do find them inspiring. As someone who has been on both side of generous giving–responding to God’s leading to give and someone who has received and sustained by the generosity of others, I encourage you to read this or go to Formsma’s website ilikegiving.com and watch some of the short films which highlight the ways people are giving. Be inspired and do something. I give this book four stars: ★★★★.

I had assumed that a plastic donut was an inflatable pillow for those in need of a little tenderness. It turns out that sometimes a plastic donut is just a plastic donut.  In Plastic Donuts: Giving that Delights the Heart of the Father, author Jeff Anderson describes a scene between he and his eighteen-month-old daughter. Jeff was sitting at his laptop working on something when he was interrupted by his little girl. She had brought him a plastic donut from her kitchen playset and gave it to him with absolute delight. Jeff loved getting that donut and it got him thinking.  Isn’t our giving to God a bit like this plastic donut?  God doesn’t need anything from us (he made everything, he has everything) but he delights in receiving gifts from us. And so Jeff uses this ‘plastic donut’ experience as a metaphor for our giving to God.

Jeff is a CPA turned day trader turned non-profit leader. Jeff says the plastic donut experience described above transformed his approach to giving. Previously he was a saver and a tither but he  had never thought of giving beyond that ten percent. After getting the plastic donut, he searched the Bible for what it told him about giving. He discovered that giving sacrificially and cheerfully to God was an act of worship. Furthermore of all the references to giving in the Bible, tithing only accounted for about 2% of the references. Jeff  was encouraged to go beyond tithing in his giving to God.

Jeff also takes aim at the often repeated aphorism, “It isn’t how much you give, it is the heart behind it.” Of course, the heart behind it is important and you can give oodles and not be worshipping. However our willingness to give and give sacrificially (a gift that costs us something) also reveals the ‘heart’ behind our gift. If we throw pennies at God but thousands of dollars toward our home entertainment system, then we worship at the wrong altar.

For a short book, Jeff has a lot to say that is challenging to contemporary church goers. I am not sure the story of the plastic donut bears the metaphoric weight that Jeff puts on it (his daughter isn’t giving sacrificially when she playfully hands her dad a toy donut). Nevertheless Jeff issues a good challenge to us to give generously, cheerfully and worshipfully.

I give this book 3.5 stars. Thank you to Waterbrook Multnomah for providing me a copy of this book in exchange for this review.