When I hear the word clobber, I  always think of  Ben Grimm—the rock-giant dubbed “The Thing” from the pages of Fantastic Four. Ben would arrive on the scene in his blue Speedo, pummel the hoards of evil henchmen and shout, “It’s Clobbering Time!” Ben Grimm or his speedo has very little to do with the book I’m reviewing here.  Colby Martin’s Unclobber was not written as an answer to comic book violence, but to the so-called clobber passages—the six passages in the Christian Bible that directly address homosexuality used by conservatives to prove the sinfulness of the gay lifestyle. 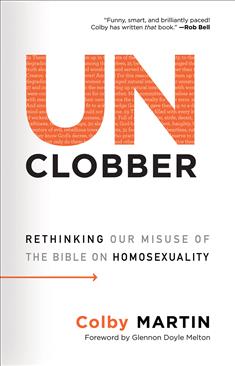 Martin is the founding pastor of Sojourn Grace Collective , a progressive Christian community in San Diego; yet Martin didn’t start out as a progressive. He grew up conservative  and was ordained as the worship arts pastor at a conservative evangelical Bible church. However, he became increasingly uncomfortable with the traditional view of the LGBTQ community as his passion for justice, mercy and grace grew. Then his tenure at the church ended  because of one Facebook post.

Don’t Ask Don’t Tell was repealed and Martin expressed joy on social media for what he felt was the end of a discriminatory policy. This sent shock waves through his faith community. Martin was called on the carpet and asked whether or not he believed homosexuality was a sin. He presented the elders with a ten-page paper explaining his position and reading of Scripture. He was fired even though his church had never taught publicly on homosexuality. In the aftermath, the clobber passages were quoted to him ad naseum.

Unclobber is one part memoir and one part exegetical survey. The even-numbered chapters walk through the clobber passages, unclobbering them, and providing an affirming interpretation; the odd chapters describe Martin’s journey from conservative pastor to LGBTQ ally. Martin is still very much evangelical, the Bible bleeds into his story, and his testimony informs his reading of scripture. Martin wrote this book for anyone who has felt the dissonance between head and heart in their response to the LGBT community (i.e. believing the Bible clearly teaches homosexuality is a sin, but feeling affirming toward for LGBTQ neighbors and uncomfortable with some judgmental rhetoric).

I like this book, in part because I like memoirs of pastors getting fired. They make me feel good. Martin’s story is a compelling read, he is funny and vulnerable. Martin also makes several strong cases in his handling of the clobber passages. He does a good job demonstrating Genesis 19 (the destruction of Sodom) has little to say about homosexuality (i.e. gang rape and inhospitality are much bigger issues in the text). He ascribes the Levitical prohibitions to a cultural, covenantal moment where Israel (possibly just the Levites) were  instructed on how to be radically different from the nations by repudiating Canaanite practices (many of the Levitical restrictions no longer apply to us, or at least not in the same way). He sets the Romans passage within the larger argument of the epistle and asserts it is possibly a Jewish quotation which Paul uses rhetorically before addressing where his Jewish readers likewise fall short of the glory of God.  With the other epistles, he discusses the nature of arkenokites and malakos  (the active and passive members of a male gay relationship, or prostitute and the John?) as describing a type of homosexual practice which bears little resemblance to committed, monogamous same-sex relationships. He opens up the possibility that some types of homosexuality are condemned in scripture, though not all.

Martin doesn’t dismiss these clobber passages, so much as offer an account of them which is self-consciously inclusive and gracious. I appreciate his commitment to wrestling with the scriptures he finds difficult rather than simply jettisoning the hard stuff. But conservatives and traditional interpreters won’t likely find Martin’s arguments compelling. He traverses similar ground similar to other pro-LGBTQ hermeneutical approaches (i.e. William Countryman, Dale Martin, Matthew Vines) which conservatives are well aware of. Occasionally I found his arguments convoluted (especially in the case of Romans). I also felt like Martin did a better job with the Old Testament passages than he did with interpreting the Pauline Epistles. Still, this remains an intelligent case for reading the Bible inclusively  from a Bible-believing cisgender, heterosexual pastor. You don’t see that everyday.

This is a worthwhile read whether you agree with Martin’s biblical interpretation or not. Conservative Christians ought to examine these clobber passages and discover what they say (or don’t say) about sexual orientation and gender. To that end, Martin is a good dialogue partner because he takes the Bible seriously and engages these texts. LGBTQ allies will appreciate Martin’s story and commitment to understanding the Gospel of Grace inclusively. Those on the fence will find plenty of food for thought. So put on your blue Speedo and attack this book. “It’s Unclobbering time!” I give it four stars ☆☆☆☆

Note: I received a galley copy of this book from the publisher in exchange for my honest review.