Outside the West, Christians endure daily persecution for their faith. Sometimes this is through discrimination–Christians are denied certain positions and rights in society. At other times, this means torture, rape or even death. Todd Johnson of Gorden-Conwell estimates that one-hundred-thousand Christians are killed per year (between 2000-2010) for their faith (Kindle location: 133). This amounts to eleven Christians killed every hour over the last decade. In The  Global War on Christians: Dispatches From the Front of Anti-Christian Persecution, Vatican Correspondent for the National Catholic Reporter, John Allen, Jr., examines the problem of persecution in the world wide church. Among the startling statistics and stories he shares, is that 80% of religious persecution is directed at Christians. 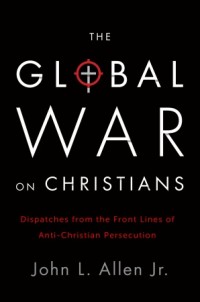 I read this book on the strong recommendation of a friend. I am glad I did, though the heaviness of the subject matter means this is a far cry from the ‘feel good read of the year.’ This is a book that will make you sad and angry. In my life, I have not known real persecution. When I was ten years old, a kid one year younger than me through stones at me because he ‘didn’t like Christians.’ But the stones were tossed in a non-committed manner and my life was not in danger. Those in Asia, Africa, the Middle East or the Eastern Block, know a different sort of persecution. Their very lives are on the line for holding to Christian faith. Their stories are both inspiring and humbling.

There were a few surprises in this book. I wasn’t naive about world Christian persecution but the severity and scope of it took me off guard. I was also surprised by the violence of some Buddhist priests against Christianity. I guess I tend to view Buddhism with Dalai-Lama-tinted-glasses. Not all Buddhists are so friendly, ecumenical or peace loving. I  appreciated how evenhandedly Allen examined the issue of Christian persecution. This is not a partisan treatment. Allen calls to task  both Israeli discrimination of Christians and anti-Christian Hamas in Palestine. He is not interested in bolstering a ‘right wing agenda’ or the idealism of the left. This is an exposé of a real problem.

I learned a lot from thist book and it has guided me on how to better pray for the world church. In North America, we live an easy existence where overt religious persecution is rare and unexpected. Allen alerts us to the real problems our brothers and sisters around the globe face and makes suggestions on how we American Christians can stand in solidarity with the Church Universal. This is an important book. I give this book  four stars and recommend it to all my fellow Christians. It will aid in helping us stand in solidarity with the World church through prayer and advocacy.

Thank you to the publisher for providing me a copy of this book in exchange for my honest review.